Home / New Music and Video / Interviews and Features / WATCH: MARGARET GLASPY shares “You and I” Video PLUS Lands Performer Cover

WATCH: MARGARET GLASPY shares “You and I” Video PLUS Lands Performer Cover

Four years ago, writing for this publication, I described Margaret Glaspy as a distinct and unique performer, a musician for whom “influences don’t serve as tracing paper.” At the time, having the opportunity to see Margaret frequently at Cambridge’s Club Passim, I was stunned by how unheard-of she was, struck by her undiscoveredness. She was finding, in a way all her own, these gorgeous spaces where jazz and folk coincided, and her voice and songwriting consistently blew me away. How did so few people know her name? I have a distinct memory of first seeing her as an opening act for singer-songwriter Vance Gilbert. I happened to be standing beside Gilbert as Glaspy played her first song, the room silent as a church. And I remember so well the “Holy shit” that Vance let out when the final note of the song faded out. It was a sentiment shared by the room, a sentiment always shared by whichever room Glaspy is playing.

In the time since then, Glaspy has released two DIY EPs—Homeschool and If & When—but this June marks the release of Glaspy’s first full-length record, Emotions and Math, a stunning collection of twelve songs released by ATO. As a devoted fan, suffice it to say that I was very much anticipating the record, wondering what it would sound like and which songs would make the cut. The day I received an advance was extremely happy-making, and I haven’t stopped listening to the record since. To say it is remarkable seems like an understatement. It is an achievement in every sense. It is both a departure and arrival. Glaspy has found a space uninhabited in music and planted her flag there; about this, fans of music ought to be thrilled. The record’s sound is markedly different than the sound I’d associated with Glaspy previously—here, she is playing electric and playing it loud; there’s thick, knotty distortion on most of the songs, and the vocals are expertly muffled and warped. “I feel like it finally clicked for me,” Glaspy says. “It all came together, in terms of having my own style. I was finally writing in my own voice and not mimicking all my favorite songwriters. We often model what we do off of what we love; I think you’re supposed to for a long time. But it all came together for me, creatively, and I felt like I was ready to go off-roading.”

And off-roading Glaspy has gone, so much so that it’s difficult to describe the record or try to place it in a genre. It resists that kind of interpretation, that reduction. It is everything at once. As a listener, I heard throughout the record the influence of artists as diverse as Joni Mitchell, Lauryn Hill, Elliott Smith, and Prince. Some of the guitar licks and solos—which seem to dare you not to air-play along, like the solo on “Memory Street”—sound like they could’ve come straight off Last Splash, the great Breeders record.

Perhaps the record is as perfect as it is because Glaspy recorded it three times. “I was so tired of waiting around to see what was going to happen, to see if someone was going to suddenly give me a check to make a record,” Glaspy says, so she decided to make the demos herself, using only an iPad. Soon after, she and her partner, Julian Lage, went out and purchased recording gear, learned how to use it at home, and engineered the record themselves again. It was during the finalization process of this DIY-style recording that Glaspy was presented an offer from ATO Records, resulting in a third and final recording.

“It was pretty essential to have made it that many times, to make it go through so many filters, to weed out all the things that were unnecessary from the songs and the arrangements,” Glaspy says. “Once we got into the studio, I knew exactly how I wanted to do it, and was able to produce it myself.” 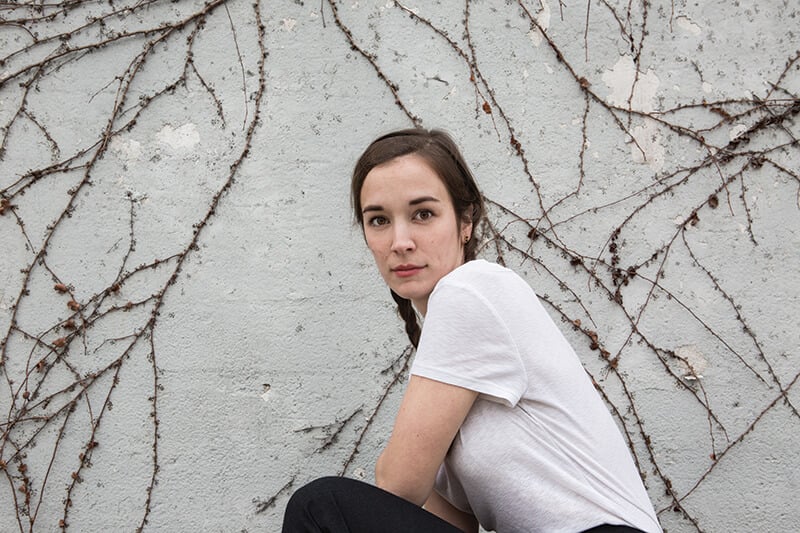 The songs on Emotions and Math are deceptively accessible on the lyric level. On the surface, a song like “You and I,” for example, seems to be a track in which the speaker is frustrated with the titular you, who is misreading the speaker’s actions as a kind of commitment. There’s a confidence, a frustration, in that song, but it’s also in conversation with a song like “Somebody to Anybody,” a kind of admission of vulnerability, a confession about the fear of commitment. The songs contain multitudes in and of themselves, but even more so when grouped together. Glaspy says it was “Somebody to Anybody” and “You and I” that brought her into the record, in fact – breakthroughs that guided her and set the tone of what the record would be, what it would sound like. Of “Somebody to Anybody,” Glaspy says, “Writing that song taught me a lot about songwriting.” And it was the style and sound of “You and I,” she says, that gave her a kind of permission, a reminder that there were no rules or rubric for what the record ought to sound like.

Asked about the impetus of the songwriting—about what space she’s writing from—Glaspy cites a recent documentary about Nora Ephron, the title of which, Everything is Copy, is a line of advice Ephron was given by her mother. “I feel that way,” Glaspy says. “Not to a negative extent, I don’t want to exploit my life, but I think humans want to be heard and they want to share what they’re going through: no matter if you’re an introvert or an extrovert.” She continues, “People need to share their experiences. I think that songwriting is my way of doing that, and it’s also my work. It’s obviously cathartic because you can deal with life in a certain way through writing, but more than cathartic to me it feels like a kind of practice. Songwriting is an extended mythology. I love being a part of that. I love finding different ways to say the same thing.”

Glaspy’s peerless songwriting skills are best evidenced on “Parental Guidance,” a standout track on the new LP. The song’s refrain is simple enough: “It’s about time you started to try a little harder, don’t you think?” But it’s in the phrasing, the repetition, that the song brings about a kind of alchemy which seems to indict both the listener and the speaker simultaneously, one of the great experiences music can create between artist and audience.

Emotions and Math, if the world spins toward justice, will land Glaspy in the bright and vast spotlight she has deserved for years. In our interview, she mentions that so many publications have been referring to her as “the new girl,” forgetting or ignoring the years and years of honing and seeking Glaspy has undergone to become the person to make Emotions and Math, one of the greatest records of the year. Standout Track: “You and I”