They sound how a warm summer night feels…

Maybe that’s because Jacuzzi Boys are a trio from Miami. Or maybe it’s because when Gabriel Alcala, Diego Monasterios, and Danny Gonzalez get together, it’s all fuzzy, pop/synth and good vibes. Whatever it is, the guys have bottled the magic of partying until the sun comes up, good friends and good times with their sound. Having come together in 2007, the boys Jacuzzi have been creating, touring, partying, (repeat) for the better part of the last six years.

Their debut full-length No Seasons was released via Orlando’s indie punk label Florida’s Dying in 2009, followed by their sophomore effort in 2011, Glazin’, which was released through their current label, Hardly Art.

This year, they are stoked about the release of their third album, a self-titled full-length collection of smooth, stoner haze, garage rock, which is due out this month. We recently caught up with Gabriel Alcala to talk about their recording process, their inspirations, and what it means to come from Miami.

How did the three of you get started?

Diego and I went to high school together and started getting into punk rock. The first band that made us want to buy instruments and start a band ourselves was when we started to get into the New York Dolls. So we both bought instruments. He bought a drum kit, and I bought a guitar, and we went into this room and covered rock and roll songs. Then we met Danny through our friend, who is our driver now. We put out our first 7-inch through [indie label] Florida’s Dying, and our first LP came out through them, too.

How did the name come about?

It was thrown out as a joke, and then it just sort of stuck. How does Miami influence your music?

Miami is really isolated. It’s like…we don’t get as many touring bands coming through. But I think the climate and the culture influence the songs.

Does that isolation help or hinder you?

I think it does both. I think people are really excited down there, for us. There are a handful of rock and roll bands. I think they get excited, maybe more so [than other places]. But it definitely hinders in the sense that, we don’t have bands coming in every week like other cities.

What musical influences do the three of you share?

We listen to a wide range of stuff. We play a lot of country in the van…a lot of punk stuff, and a lot of old Miami hip-hop.

Can you talk about your songwriting process?

Every time we write a song, it can come from a different place. There are some times when we say, like, ‘Let’s write a really up-tempo rocker, or something.’ But usually it just comes naturally from a cool song title or a bass part or a drumbeat, or a guitar part. It can come from anywhere. Sometimes it’s conscious, and sometimes we just go with the flow.

You traveled to Key Club Recording Company in Michigan for your studio time. Why do you go so far?

Yeah, we basically drove up there in one go. It’s pretty far, but it’s an amazing studio. It’s owned by this couple, Bill and Jessica. And the place is super, super cool. Walking in there, it’s just like, ‘Holy shit.’ We stayed there for a month this time, which is the longest we’ve gone in the studio. Upstairs there’s bunk beds, and we were able to work all day. We slept there and it was like a summer camp. So we would wake up, and have lunch. Then we would basically work all day, and at night we’d start drinking or whatever, and basically we worked until 3 a.m. 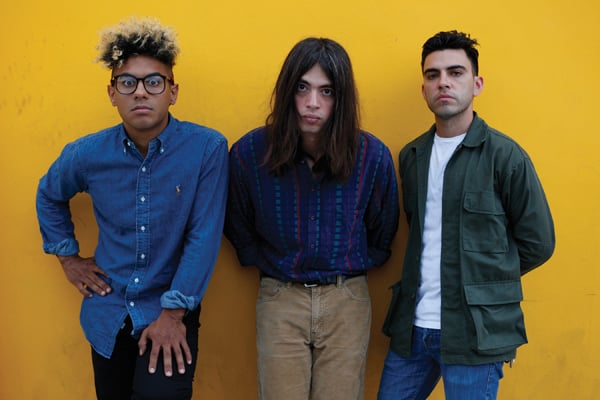 What instrument, effect, or production element have you guys come to really like?

On this new album, we used a synth for the different textures. And we sort of harmonized guitars a lot. They make this really cool, weird sound. Like instead of playing chords and harmonizing chords, we would harmonize the notes. You can hear it on a couple of the songs on the new album.

Is there a highlight moment on tour, or something you’re looking forward to?

I think Nashville is always so amazing to us. We have a lot of friends there. The scene in Nashville is super cool. And the show we did, was like two or three days ago…it was super fun. But things we are looking forward to…I am really looking forward to playing Chicago. It’s two nights in a row at the Empty Bottle. The Empty Bottle is like, an amazing place. We’ve played there once or twice before, and it’s just super cool. And we are meeting up with the band we are going to be touring with, Man or Astro-man?.

We went the year before, and played like three shows. And this year was like ten. In a weird way, the year before, and only playing three shows, was way more exhausting. Because when you only play three shows, the rest of the time you’re just walking around, looking for stuff to do, drinking. And you just end up feeling exhausted. But when you play shows back-to-back, you have something to do. You just go on autopilot.

How are Jacuzzi Boys different from other groups?
I think we have unique personalities. We take the music seriously, as a band. But we don’t take ourselves seriously. I think in our live shows, our personalities come out, individually. And our personality definitely comes out through our records. I don’t know how else to describe it, but I think it’s unique from other bands.

What is it like to be with Hardly Art?

They are really great; they support us a lot. We’ll come to them with an idea, and if they can manage to pull it off, they’ll do it. And if not, they still try to help us accomplish whatever vision we have. They have just been supportive. They’re cool, they’re funny. We really like dealing with them. What are your future plans?

I want to tour a lot, for sure. But at the same time, we haven’t put out a 7-inch in a long time. So after this tour I want to come back and record six songs and put out three 7-inches, and just keep putting out records. As far as touring, I really want to go to other countries that I haven’t gone to yet. I’m excited for the possibility of going to Australia, or Japan. We’re going to tour the U.S. again [this month], and I think Europe in November. Then hopefully after that, record another LP, tour some more. Just continue to have fun, you know? Because we are having a blast…