Home / New Music and Video / Interviews and Features / Interview with The Dismemberment Plan: Descending Into The Uncanney Valley…

Interview with The Dismemberment Plan: Descending Into The Uncanney Valley…

In 2003, Washington D.C. based post-punk band the Dismemberment Plan vanished from the face of the earth. The quartet had released four seminal indie rock albums and performed on tours with Death Cab for Cutie and Pearl Jam, but the band decided to call it quits.

The individual members packed up their instruments and traded them for suits and ties in the corporate workforce. Lead singer and rhythm guitarist Travis Morrison accepted a position as a sales tech for the Huffington Post and released a solo album called Travistan. Lead guitarist Jason Caddell transitioned into freelance audio engineering, while bassist Eric Axelson taught high school students about voting rights and civic efficacy as a manager for Rock the Vote. Drummer Joe Easley drifted into stratosphere as an engineer at NASA. However, it appeared the universe had a greater plan to reunite this dismembered bunch. In 2007, the band announced it would be playing a one-off benefit concert in memory of Callum Robbins, the son of Jawbox singer and DeSoto Records labelmate J. Robbins. Tickets to the show sold out within minutes and the fans’ online reaction was tremendous; people wanted to see the D-Plan in action again. The band continued to play a handful of shows between 2007-2011, slowly gaining traction, until 2012, when Travis Morrison revealed the band had been working on new material. Fast forward to 2013 and the group is releasing a new album entitled Uncanney Valley.

Uncanney Valley is a refreshing experience – the Dismemberment Plan manages to hold onto their signature brand of melodic, offbeat dance punk while still being progressive and gracefully venturing into new sonic territory. The time spent away from the studio and the road has allowed the guys to rediscover the initial alchemy that made the early records so dynamic and explosive. I had a chance to speak with Dismemberment Plan frontman Travis Morrison about the new album Uncanney Valley and what happened during the band’s hiatus.

It’s been twelve years since your last studio album dropped; what’s with the wait?

We were doing other things – raising kids, working jobs, playing in other bands, teaching, building robots at NASA, singing in church choirs… life!

An “Uncanny Valley” is loosely defined as a field of aesthetics in which a robot’s characteristics resemble a human so closely that it causes repulsion in human beings. Are you insinuating the new Dismemberment Plan consists of robots? What does Uncanney Valley mean to you?

Haha! No, we aren’t repulse-tendencied or robots. We are quite friendly! [laughs] Actually it’s intentionally misspelled ‘Uncanney Valley’ and it looks like a small town in Virginia. I’m from Virginia too, just not from a small town in the state. I liked the confluence of good old-boy and high tech there. That might kind of speak to our personalities. We aren’t the Dukes of Hazzard, but we’re kind of down-home types. We don’t have that continental showbiz discipline that Daft Punk has. We’d rip off our helmets half way through the show to make out with someone! [chuckles] What motivated you to go back into the studio and complete a record after a ten-year hiatus?

We played some shows to promote a vinyl re-release and we just started jamming. When the shows were over, we kept jamming, and we tried to keep it in that place. Fun, open-ended, just get loose and make noise.

Did you plan on enticing younger indie rock fans while recording Uncanney Valley?

I don’t know, man, you just don’t fake the bacon. When I was 20, we had so many older heroes. Tom Waits, the guys from Morphine, Sonic Youth, Brian Eno and Los Lobos. It’s not about age, as long as you keep  it real, wherever you are in life, people can dig it. Game recognizes game across the generations. You just have to stay true to yourself. I’m not saying the Miley Cyrus Twerk Nation is gonna dig us, but they never did anyways. Not even when we were 25.

Uncanney Valley is a bit more toned down and less angry than your previous releases. As you get older and more mature as a songwriter, what do you draw inspiration from?

The thing about inspiration is that is that it will never ever come from where you look. It will always come from your peripheral vision. So I’d say I draw inspiration from working hard and patience and hoping it just clangs on my head from a direction I never anticipated. If I’m disciplined about it, that usually happens, no matter how freaked out and writer’s-blocky I feel.

Can you describe some of the lyrical themes and songwriting process behind the new LP?

Where I used to sing about sex and loneliness, now it’s love and ambition. Sex becomes a subset of love as you get older, and loneliness gets a little corny. I mean I know it and I feel it, and I’m not a jerk… but let’s be real. As far as songwriting, it’s a third me bringing in songs and the band trying to work through it and a third the band jamming and something catches my eye. Then the other third is a hybrid, where I bring in something and it sparks a different direction and I’m like, ‘Man, this is fresher than what I brought in, let’s ride this pony.’

Where was Uncanney Valley recorded and who produced it?

We did it with the first-amongst-equals leadership of my bandmate and freelance audio engineer Jason Caddell, recorded at Magpie Cage in Baltimore with J. Robbins, mixed by Paul Q. Kolderie.

What equipment was used to record the new LP? What gear are you taking on tour and what’s your favorite piece of gear in your collection?

Man, I’m the singer. I don’t know this stuff [laughs]. I play a Les Paul through a Fender 1×15 combo. I can direct you to Jason Caddell though! He knows.

(Lead guitarist Jason Caddell chimes in) J. Robbins is an incredible engineer, and the Magpie Cage has an incredible live room. Those two factors were far more crucial to the sounds on the record than what gear we decided to use. J. and I spent a fair amount of time strategizing before the sessions began, with particular emphasis on the drums. His implementation of that strategy is what you will hear on the record. That said, here’s a partial list:

Magpie Cage has a solid working collection of mics and pres. Drums were largely recorded with API and True preamps, with dynamics, condensers, and ribbons by Shure, Beyerdynamic, Chameleon Labs, and others. Guitars with APIs and ribbons by Beyerdynamic and Royer plus some compression from a UREI 1176. Bass with AT condensers and AKG dynamics, plus an Avalon DI. Keys were largely direct. Vocals were recorded with a Royer R-121 at Magpie Cage, and with, if memory serves, Neumanns and other equipment at Grand Street Recording in Brooklyn. Plus our standard instruments: Les Pauls and Danelectro 12-strings with Fender ’65 Custom 15 Schecter Custom PTs and Les Paul Jr with Tone King Meteor II, custom Fender Precision Bass with Fender Super Bassman 300. [For drums],Yamaha Maple Custom kit and Roland SPD-SX drum sampler. [And also] Reason 7 and M-Audio controllers, Moog Little Phatty, DSI Mopho [for keyboards]. All of these instruments were used in the studio, and all of them save the synths will be coming on tour. 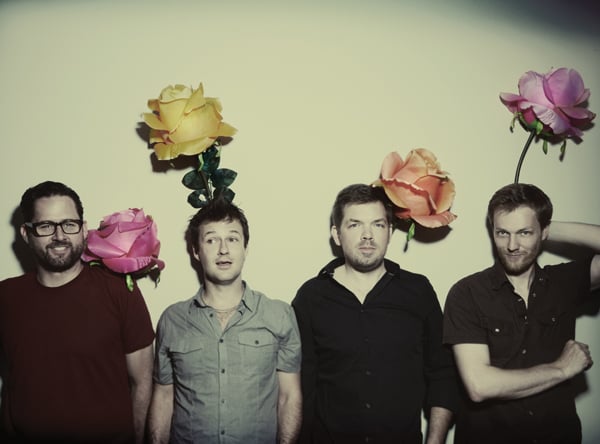 Thank you, Jason! Dismemberment Plan originally started out at Interscope. Then you moved to indie label DeSoto records and now Partisan Records. How has the band’s relationship with labels evolved since its inception?

We put out our first two records on DeSoto. Then we signed to Interscope and were dropped before the record even came out, so that record came out on DeSoto [as well]. Then our fourth and final record was released on DeSoto.  Not to be a correct-a-holic, but we’ve never had a release on a major label.

Now, you know, in the end it’s on us to make the great art. That’s our job. It’s their job to support us.

Both Partisan and DeSoto did that. And I mean, we got a huge budget to record Emergency & I and then got to put it out on a small label. That’s kind of an amazing forward fumble [chuckles].

As a band that originated in DC when the post punk scene was starting to bloom, was D-Plan heavily active in the DIY community there?

Yes we played benefit shows all the time, all-ages shows, all of that; it’s in our bones. It’s so important to be ready to play a show for free to help someone else. You’re a bit lost if you won’t, I think.

What’s the most difficult part of the music business and what do you suggest young musicians should learn in order maintain control of their careers?

MAKE YOUR OWN DECISIONS. You will have so many decisions to make and what Radiohead does or what Fugazi does or what Mariah Carey does is good for them…but you’ll have to decide on your own what works for your business. Like, should you be on Spotify? Well, look at it calmly, like a business decision. It’s great for catalog discovery, but they don’t pay much. They aren’t a charity, they’re a business just like you, so take a breath and make a reasoned decision about whether it works for you. And then do this a thousand times over!

And be tough-yet-flexible. It’s a hysterically dynamic business to be in, very volatile, and you have to stick by your guns BUT be honest when your guns are fresh out of bullets. And go get a new gun or maybe people need flamethrowers now.

What advice do you have for musicians about being on the road and balancing the need for personal time and creative time?

Tour not because it’s a career move, but because the Kerouac dream is still alive and you want to join the circus and see the world. And when the dream is over, for you, STOP.

What are the unexpected consequences of being a musician and what would you tell young artists and bands to be aware of?

What personal qualities do you need to succeed as a musician?

You have to have a strange mix of introversion and extroversion. Like Mark Sandman of Morphine said, “I’m a loner, but I’m not antisocial. I’m a sociable loner.” You have to love money, but be OK without it; you have to love being in the game more than winning it.

What are the three things you like most about being a musician?

The vast network of acquaintances and connections, the therapy of making noise and the surprises – sometimes brutal, sometimes miraculous, always interesting [smiles].