Jordan Rudess is best known as the keyboardist for Dream Theater, a role he stepped into in 1999, but he occasionally records and performs in other contexts, such as a 2001 one-off duo performance with John Petrucci (released as the CD An Evening With John Petrucci and Jordan Rudess), as well as backing up Blackfield on their first short US tour in 2005 and playing a solo opening slot for them on their second in 2007. He also contributed to Steven Wilson’s 2011 album, Grace for Drowning. 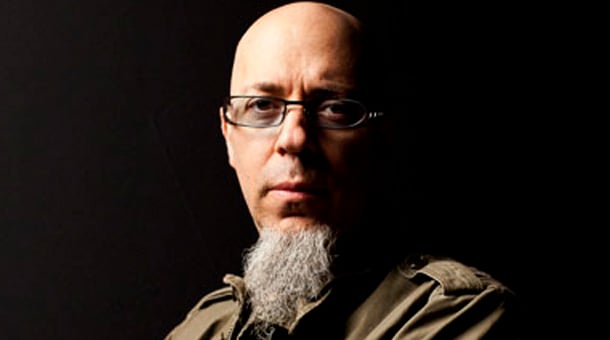 Rudess explained how he started Julliard at age 9, in the pre-college division, and described himself as “a closet improviser” who became more aware of the progressive rock movement when he was about 17 or 18. His interests in synthesizers and controlling sound took over and he left Julliard.  As Dream Theater prepares to release in September its twelfth studio album, the self-titled Dream Theater, Rudess forges into the future of his company, Wizdom Music, fusing his love of teaching and technology into the development of IOS apps.

Always in constant motion, Rudess discussed revving up for the recording in October of his orchestral piece, Explorations, which he composed in 2010 and was premiered in Venezuela on November 19, 2010 by the Chacao Youth Symphony Orchestra and guest conductor Eren Başbuğ, as well as his solo piano album, Explores, that became possible through the Pledge Music project at http://www.pledgemusic.com/projects/jordanrudess.

Do you remember the moment you realized you were no longer playing in a standard way, and that you had crossed over into a more progressive/experimental mindset?

Not really. I was always into improvisation and putting together different styles; I found it natural to have a blend of classical music.

Was there ever a piece of music you had to learn along the way that challenged the hell out of you?

There were many times when I would look at the page and it would look like a bunch of black dots. I recount things like getting aHungarian Rhapsody to learn. I would go to the music store and I would pick up the sheet music, and we’d have a drive home from New York City to where I lived in the suburbs and I remember opening up the book to see what my teacher assigned me. I can remember thinking ‘Oh my God; it’s so confusing I’ll never figure this out.’ I would go very slowly, one hand at a time and sure enough it would start to make sense. It actually started to come together in my mind.

Do you write music down first?

With Dream Theater, I definitely use standard notation as a method of writing whenever I really want to line something up and see it. If I’m writing something with a contrapuntal nature to it, like if the guitar is playing one line and the bass has a line that goes against it and I’m playing something different, very often it’s helpful for me to see it and to use the old-fashioned pencil and paper to make it happen. I find myself doing a lot of writing. I’ll raise my hand in the middle of a Dream Theater writing session and say, ‘Hey guys, can I just get 20 minutes to sit here and kind of work out where I think all the parts should go?’ And they know I’m going into that mode where the music is going to end up possibly involved and complicated but also really engaging and interesting at the same time.

I’m a big Logic user and I do a lot of improvising, so sometimes I’ll play something into my recording system, and I’ll be able to view the notation on the screen and, while looking at the notation, I can record the next track. So that’s another way I can get the job done. Then it’s more like live playing where I’m following along with the notation of what I already played.

What has fueled your sense of creativity over such a long career with the same band, and virtually the same guys (until Portnoy left in 2011)?

Music is my life and I really love it; it is my hobby and my profession and I enjoy so many different aspects of it from performing to sitting at my piano improvising, playing with sounds and messing around so in general if I’m relatively clear and healthy mental state which I try to keep in, then that type of creativity music just flows. For me, music is like talking; I have an easier time expressing myself through the language of music than [with] verbal communication, although I’m getting better at it through time with all the interviews and stuff.

How does playing with different musicians help you progress as a musician? Did drummer Mike Mangini’s arrival in Dream Theater light any specific fires in your creative process?

I’m so grateful for the chance I’ve had in my life to work with all these great people and learn. I really like when I work with people who might have a skill set that excels in an area where mine doesn’t. Mike Mangini is an example of somebody whose sense of rhythm, and mathematical brain when it comes to rhythm, is just incredible. On the new Dream Theater album, Mangini was able to add really creative structures and rhythms that we could apply pitches to musical lines and come up with something we would never have come up with because none of us really think like that. Of course in Dream Theater I’m lucky enough to play with people who inspire me in different ways.

Dream Theater’s last album A Dramatic Turn of Events was nominated for a GRAMMY; how did that feel?

We’ve worked hard through the years building a solid structure with our band on every level, including our fan base around the world. On top of all that, the notice of the music world was really cool. It was nice be included in a world other than the one we worked so hard to create.

Do you think the majority of Dream Theater fans are musicians themselves?

It’s unusual to have a rock band where all of the players are virtuosos and play the way all the guys in Dream Theater do, but I would say it’s a mixture of young and older musicians. A mixture of those who like progressive bands like Genesis and King Crimson as well as those who came from Iron Maiden and other influences.

I saw the animated characters introducing the band on the Dramatic Turn of Events tour, and now your wizard character brands your company Wizdom Music; I’m curious as to how that branding developed? Did Dream Theater collectively seek out an artist for the idea or did you just enjoy the character enough to continue using it in branding your company? In other words, how did you become “the wizard”?

The wizard character is a big part of my professional life. Keyboard players are thought of in that regard – through doing what I do with the synthesizers and gadgets people would call me “the wizard,” and it all kind of came together very naturally. The title was placed on to me and my friend, Mika Tyyskä, was the designer. He decided he would make this character that resonated with me and it worked within the band context as well.

I love the idea of taking a passion for music and translating it to technology. What inspired your passion for technology and app development?

The online conservatory  (http://www.jroc.us/) has been around for years. I’ve been in the online education thing for many years. That’s the educational part of my world. Lately I’ve been starting to create education apps like EarWizard, which is a free IOS app. The reason I got into app development is because the first time I touched the iPhone with the keyboard on it, I recognized the interesting opportunities for musical expression on a multi-touch surface. I thought, ‘Wow this is a really cool idea and there’s so much that can be done.’

When the whole app thing exploded, especially on the music side, there was an enormous outpouring of creativity and it was very inspired. I reached out to some developers who I thought would make good partners to explore the visions I had.

My first app was called MorphWiz and I created it with developer Kevin Chartier. It was a chance for me to see my vision through to reality, and I started my whole app company (Wizdom Music at www.wizdommusic.com/).

Why don’t you create Android apps?

MorphWiz is Android, although, at this point, I don’t have that big of an interest in Android because in that marketplace there’s lot of piracy. The system isn’t as comfortable for small-time developers to spend a lot of time on it unlike iOS that has a system in place, which makes it easier to survive.

Is there a difference with the way you are involved with the music you create depending on the platform?

Definitely. I’m a big believer in the tactile element to a musical instrument but I’m also very interested in visual feedback. On MorphWiz for example, when your finger goes down on a note you’re triggering a sound but it’s showing you a picture of the waveform and as your finger moves it can be not only sonically changing but the visual can change; so you’re getting a lot of feedback, but what you’re not getting on an IOS device is the tactile sense. You’re just basically touching on glass.

So you might call it a problem. When you’re playing on a piano you get this great tactile sense with your fingers going down on keys and you feel where the black keys are and the white keys are which gives you a lot of information but there’s no real visual sense. So the best thing would be to combine it.

What kind of responsibilities do you have in your position as Director of Music Experience for Roli Labs?

We’re making an instrument called the Seaboard.  It features the ability to kind of sink into the note with your finger to have a soft feeling about the note, so it provides a super tactile sense but in a modern technological instrument. I’m an adviser to help guide their business musically and I teach. My job is a combination of things involving playing the instruments and more.

Are there any other projects you want to discuss?

Pledgemusic.com involves a few things, and one major thing I have there is all about bringing to life this piece I wrote called Exploration for keyboard orchestra, and the whole idea is to raise funds to record with a full orchestra in Poland. It’s going to happen. It’s been a major campaign to get a full orchestra; that is not an easy task, but we’ll start recording in October. Fans can find out more at: http://www.pledgemusic.com/projects/jordanrudess.