Interview with Jason Rivera of Gaytheist

Gaytheist. Say it out loud. OK, did you get that out of your system? Spin labeled them as “unfortunately named,” which we think it absolute hogwash. One of the most abrasive, unique and dynamic vocalists to hail from the Pacific Northwest in recent memory, Jason Rivera has known his fellow band mate Tim Hoff [bass] for over 20 years, and Nick Parks [drums] for more than a dozen, but the group only formally got together in 2011. Now, just two years later, they’ve just released their latest LP, Hold Me…But Not So Tight on Good To Die Records, a killer follow up to their previous effort, Stealth Beats. We caught up with Rivera recently to chat about the band’s recording process, songwriting collaboration, and why they’ve chosen to put their drummer front and center at live shows.

Who leads the creative process for the band – is that mostly you?

It’s me in so far as I write music at home, and I’ll show up at practice with my ideas. Tim and Nick will flesh it all out so we have an actual rock song.

Can you take us inside your songwriting process?

Sure. For the most part I just sit with my guitar – I’m a hands-on writer, I can’t read or write music, so I start with a riff and slowly form the concept of a song, and then I’ll come up with a vocal melody. Usually, before I’m done showing [Tim and Nick] a song, Tim will immediately plug in some lines, and Nick starts thinking about some drum stuff; they’ll start writing their parts and eventually we’ll have a fully worked out song.

So you bring them the framework, and everyone adds their layers to it.

Yeah – with Gaytheist I try to write for our drummer. I’ve been in other bands where I try to write all over the place, and I wasn’t thinking about everyone’s strengths in the band. This time around, I knew Nick was just this amazing drummer who goes insane and plays so fast, and so great. Everything I write is so loud and heavy that it just complements his style perfectly.

We’ll have things where I’ll be, ‘You know, this is kinda the same tempo as another song…’ and before I know it, Nick will write a new drum part for it to make it sound unique. He saves me a lot from having songs that sound the same. 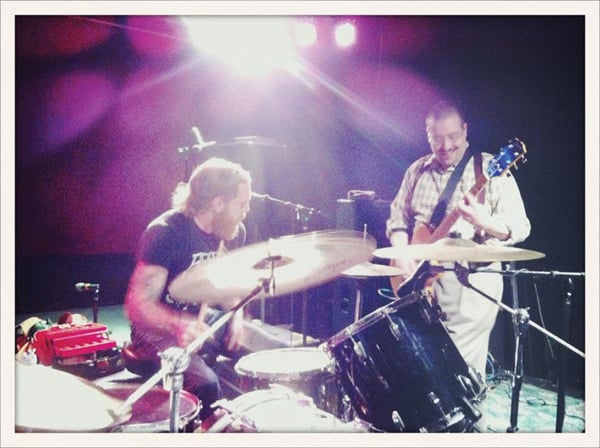 It can be very easy to sound the same, and what’s cool about you is that you don’t. Now how do you take such an abrasive sound to the stage with just three members?

I’ve been in a couple two-pieces before, so the idea of getting everything tight and unison is something I learned a while back. So I think it works well – our live sound features very loud amplification so we can be heard over the drums. I suspect Nick could kick us out and still pack places [laughs.] He’s our real frontman – when we set up live he’s up front on the stage. Tim’s an excellent musician; he plays bass in the band but he’s actually a lead guitarist. So his bass lines are very melodic and very full; he fills the space amazingly well.

So I find we can do these short little numbers and so much can happen in a minute, then we’re done. We keep ourselves entertained, and hopefully the audience, too.

Do you ever feel limited by having just three members?

I have in the past, but where I’m at now I’m very satisfied. And if I’m not satisfied, I have the ability to go put together something else and keep this going. But I’m so happy with the way this has been going, and we’ve been getting so much done that I’m really content right now.

For those of us on the East Coast who might not know the area so well, is the Pacific Northwest a scene in itself, or are Portland and Seattle and the stops in between separate scenes?

They’re separate scenes, but they need each other because the Northwest is so spread out…so you’ve got a three hour drive between Portland and Seattle, with not much else beyond that. We rely heavily on each other – it’s not like the New York area where you could play 20 different cities and still sleep in the same bed at night. But here, you get to know people in Seattle and Seattle people get to know Portland people and we help each other out… Now, we have to address the band name. From a career standpoint, has it ever presented a problem getting booked, getting press or anything like that?

The only thing I know for sure, when Stealth Beats came out, there was a little problem. Public radio flat out told the label they were hesitant to use our name. And someone brought up [the band] Fucked Up as an example. Fucked Up was getting press, and radio play – it was a very long, uphill battle for them, but they were doing it. I started this band under the pretense I’ve started ever other band, which is to have fun and not go crazy; although, this is the first project I’ve done where I’ve had other people coming to me with interest.  And once [our label] Good to Die got onboard, we knew we’d have to start to get serious and think about things like whether our name would hurt us.

We may have lost opportunities we didn’t even know about [with our name]. But in a way, the name…I constantly see people online say it’s one of the best names they’ve ever heard. So in some ways it might be the thing that gets our foot in the door with [listeners]. It just might be the thing people need to take those 30 seconds to go on YouTube to listen to a song. You know, ‘What on earth could Gaytheist sound like?’ What are you guys excited about on the new LP?

It’s actually pretty similar to our last album, since we recorded at the same studio. Stealth Beats was the best sounding recording we ever had, so we went back happily for the new one. We put the album together by just practicing the hell out of the songs. Money is always an issue, so we wanted to be ready for the studio and not waste time. This time around, it’s more involved than last [record], as far as the dynamics and changes, but I write a lot of music and we just like to jam on them. We got to where we had enough material to present a new album, and we hope you like it.