Home / New Music and Video / Interviews and Features / INTERVIEW: The Linda Lindas On Finding Their Way Through Creative Freedom

INTERVIEW: The Linda Lindas On Finding Their Way Through Creative Freedom 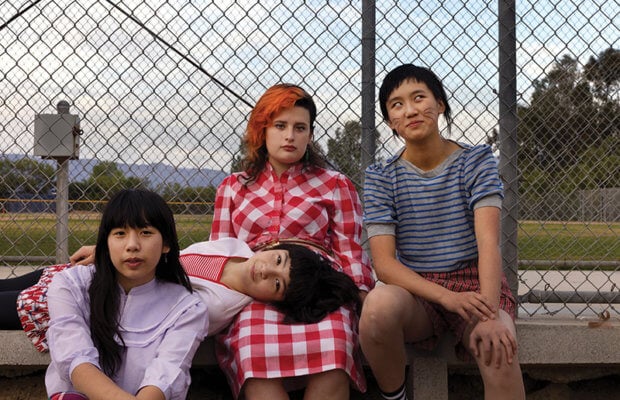 Punk music isn’t necessarily a genre one would associate with Gen Z. A quick scroll through some of the most popular posts on TikTok will, more than likely, yield an entire playlist’s worth of autotune-drenched pop and R&B before one even comes close to hearing anything that resembles the iconoclastic sound that turned the music world on its head almost fifty years ago. But for Los Angeles-based group The Linda Lindas, punk isn’t simply a vintage novelty genre. It is an inclusive and freeing form of artistic and personal expression.

Made up of sisters Lucia and Mila de la Garza who take up duties on guitar and drums respectively, their cousin Eloise Wong on bass, and childhood friend Bela Salazar on guitar, the group members’ ages range from 11 to 17. The daughters of Grammy Award-winning producer and mixer Carlos de la Garza, Lucia and Mila had never considered music as an option until their cousin Eloise approached them with the offer to play in a new wave cover band assembled by Dum Dum Girls lead singer Kristin Kontrol for Girlschool LA back in 2018. Looking to enhance their raw and high-spirited sound, the three of them recruited Salazar, who at that point, had more than enough experience on guitar.

Over the next three years, the group cut their teeth playing benefit shows and all-age matinees around Los Angeles, sharing the stage with LA punk luminaries like Alice Bag, The Dils, and The Alley Cats and legendary riot grrrl group Bikini Kills. During this time, the band released a self-titled EP and was featured on the Netflix documentary The Claudia Kishi Club and in the Amy Poehler-directed movie Moxie. But it wasn’t until a video of a live performance of their song, “Racist, Sexist Boy,” went viral last spring that the group caught the attention of A-list musicians like Tom Morello, Flea, and Thurston Moore, and received multiple accolades across social media and the music industry.

Following a string of television performances that included Jimmy Kimmel Live and The Late Late Show with James Corden, the group’s debut full-length album, Growing Up, came out on April 8th via Epitaph Records. A fugacious collection of tightly-wound, fists-in-the-air, hard-hitting rockers, the album serves as a musical bridge between the dissident and nonconformist ethos of “first-generation” punk rock, and the beliefs in inclusivity, social equity, and justice that define the current cultural zeitgeist. 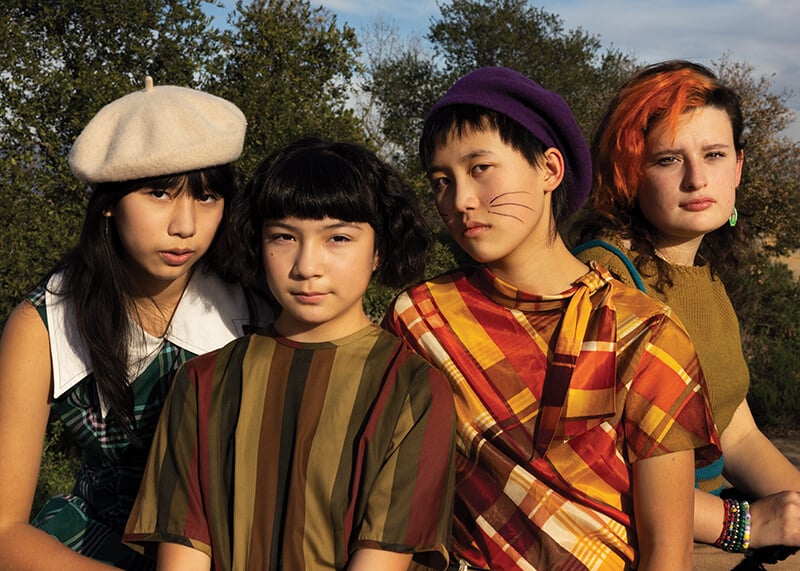 I got the chance to talk with The Linda Lindas and discuss their new record, the LA punk scene, and their thoughts on their growing popularity.

So I know a few of you guys are related, but then of you isn’t, correct? How did you all sort of come together?

Lucia: Mila and I are sisters and Eloise is our cousin, and we’ve known Bela since we were very tiny because our moms worked together.

Bela: We’ve known each other for more than a decade, at least.

How long have you been playing music and what inspired you to pursue a musical path?

Mila: So Eloise, Lucia, and I all used to play classical piano before the band and Bela already played classical guitar. So, we were all already kind of playing music and had grown up around it. We’d always had music in our lives.

Eloise: Kristin Kontrol of Dum Dum Girls invited us to play in a band with a group of kids that she put together for this show where we got to perform with bands like Best Coast. After that, Bela invited us to play a show with her friends and we just kinda went from there.

Lucia: For me, I wouldn’t say that I had a moment where I went ‘I want to play guitar for the rest of my life.’ It was more of like gradually realizing that I love being on stage with all these people and just writing songs. I kinda felt like I belonged when I was on stage. I felt like I belonged when I had a guitar. I feel like I don’t belong in a lot of places, but I’ve never felt out of place when playing music. Are there any artists or bands that inspired you?

Lucia: I’d say The Go-Go’s and Bikini Kill and Sleater-Kinney and Best Coast are like the original starting point for me.

Your first show in LA, you played it as a new wave cover band. Can you tell me about that experience and how it came about?

Lucia: So Kristin Kontrol from the Dum Dum Girls was looking for a younger group of kids to play a few covers. That was the first time that the four of us had played on stage together.

Eloise: Kristin got a video of me singing for one of the shows that my parents put on for my school’s music program. So, she invited me, and I was like ‘Hey, maybe I should invite my cousins Lucia and Mila.’

Lucia: And to be honest, it didn’t really sound super great, so we were thinking that maybe we should get someone who actually knows how to play their instrument.

Eloise: Haha yeah, so enter Bela! Because she knows how to play better than all of us. She really knows her instrument. How has it been to be a part of the music scene out in LA? Where have you played so far?

Eloise: My parents put on these benefit punk shows to raise money for my school’s music program out in Chinatown. So that’s where we started playing. We started out playing with bands like The Dils, Alice Bag, The Alley Cats and so many of these LA punk bands and that’s sort of what we kind of grew out of. It’s so cool to be a part of that scene.

Was there ever a point when you felt intimidated or when you had any doubts about being on stage in that particular setting or did it always feel fun and normal? And how was the stage chemistry then, and how has it evolved over the years?

Mila: I was certainly a little excited and jittery and a little nervous the first time we played. But then, once we got on stage, the more we did it, that kind of went away. So it’s felt sort of really natural, really comfortable.

Lucia: For our first show, we went on stage around 11 at night, and that was really late at the time. But then, by the time we actually went on stage, we weren’t tired at all. There was a lot of energy and also anticipation both from the audience and from us because I don’t think that they knew what to expect. As time goes by, a string of really exciting things happen for you: one of your tracks is featured on the Netflix show, you get an appearance in the Amy Pohler film, and finally, you give a performance at an event at the Cypress Park LA Library for AAPI Heritage Month last May where you perform “Racist, Sexist Boy.” Can you walk me through all of these moments?

Lucia: Moxie actually happened first, even though Claudia Kishi actually came out first. So, the timeline goes: Claudiacomes out and we go into lockdown, and that’s when we start writing a bunch of songs. We have to cancel a bunch of shows, which was really sad because we were supposed to play with Jawbreaker and a bunch of other cool bands. But yeah, so we start writing a bunch of songs and our EP comes out in December of 2020. And then, Moxie comes out in March of 2021, and that felt really cool because we’d been waiting for that for a really long time. And then in May, that’s when the video goes big. For me, the whole thing felt like a realization that there were all these other people out there and that we had a lot of support, that there were all these people who are interested in what we’ve got to say.

Mila: For me, with everything that’s happened, I feel like we’re still kind of doing the same thing. We’re just having fun and playing music that we love. Now it kinda feels like we have a better or bigger audience, but I don’t think that we’ve really changed that much. I think maybe if anything, we’ve gotten closer. Like a lot of people, like my classmates, for instance, view me differently now, but I haven’t really changed. Your debut LP, Growing Up came out digitally on April 8th before it’s released on vinyl on June 3rd. How does it feel to have your first full record ready to come out, and what was the process of recording this like?

Bela: Recording was really fun. We’ve always enjoyed being in the studio with each other.

Lucia: The process started when we got out of school last June. We sort of raced to get it all done before we had to go back to school. But yeah, recording was super cool. It was a lot of fun to get to know our songs a whole lot better and each other better. It was a whole different experience. There was this really professional feeling and it all just felt really nice because we felt like we were making something. It just felt really exciting.

As the touring and festival season draws near, what do you guys have planned?

Mila: We’re playing in Japan, and we’re really excited for that. We’re doing two shows, one in Tokyo and one in Osaka.

Lucia: As far as touring goes, we’re probably not going to stray off the US too much for now. But at some point, we’d love to travel and play in South America, Europe, and Australia. We’re being patient though. Right now, New York, Las Vegas for When We Were Young, and Japan are more than we can really ask for. Oh, and we’re headlining at The Troubadour (in LA) on April 10th, and then also in New York at The Mercury Lounge. Any artists or bands you’d like to work with in the future?

Any advice for anyone out there, no matter what age they are, who’s interested in pursuing music as a career or as a creative outlet?

All of them in unison: Go for it!

Eloise: Even if you don’t know how to play your instrument too well, just go for it.

Mila: We didn’t know how to play our instruments when we started.

Eloise: Yeah…but we did it. Just go for it and have a blast.

Lucia: It’s all about what you want to say and what energy you’re going to bring. People are going to love it if you love it.