How does one describe Baby Baby to someone who hasn’t experienced the band before? Well, for starters, Baby Baby is to partying…well, what Andrew W.K. is to partying. Long story short: expect a fun time at a Baby Baby concert. Expect lead singer Fontez Brooks to be chronically shirtless. Expect blistering punk rock seamlessly infused with New Wave synths and the catchiest damn gang vocals in recent memory. Expect to leave humming the entire setlist on the ride home. And expect to tell all your friends you’ve just seen the future of rock and roll, and it tried to hit on your girlfriend…and possibly vomited on your shoes.

We recently sat down with the entire gang to chat about their new album, Big Boy Baller Club, how they manage a DIY career and how they reinvest gig money into their studio recordings. Trying to decipher who’s speaking at any given time is a fun exercise in futility when talking to the whole group over the phone, so for simplicity’s sake, let’s just go ahead and attribute all quotes to the band as a collective unless otherwise noted, shall we? Onward!

In the last few years, you’ve picked up some new members. Care to elaborate on what the new blood adds to the group?

Fontez Brooks: Ryan [Burress, keys] is actually the newest member, and he’s been there since our first Atlanta show, which is really crazy. So everyone who’s on board right now has been there since the early days, it’s like a family.

Are you looking to expand the family further, or are you good with the lineup you’ve got now?

Fontez Brooks: I think with how popular twerking is getting, we could hire a couple twerkers, you know what I mean? But other than that, no.

So you want to have “The Baby Baby Dancers” or…

Fontez Brooks: I mean, that would be pretty sick – imagine if you came to the show and there were just dancers twerking in the background. And no one ever explains why they’re there…

Colin Boddy: We’re gonna have to start playing bigger stages with all theses dancers, because I’m already getting bumped by Grant’s cymbols, so I don’t know where these twerkers are gonna be. [laughs] 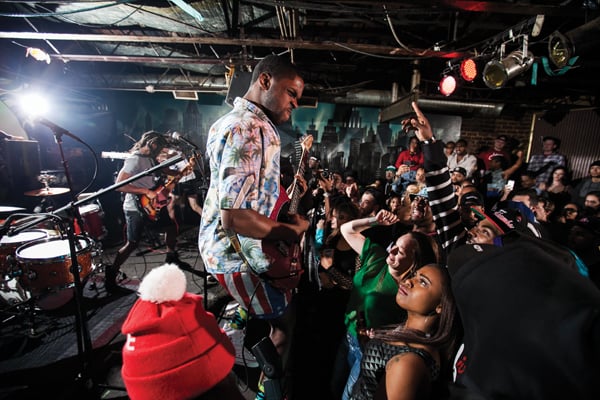 So you guys have a new record out, Big Boy Baller Club – perhaps the most appropriately named album of the year. It sounds a lot tighter and cleaner than the last one, recording-wise. Did you approach the studio or the mixing sessions in a different way than on your last record, Money?

Fontez Brooks: This time around we really did it, you know what I mean? We were grown ups, and we paid for it, and we tried really hard. On Money we tried really hard, too, but [during the recording] we drank a 30-pack, so by the end we were just yelling into the microphones. Kyle [Dobbs, bass] opened up the beer cans and we made songs, and it sounds awesome. But on this one we really sat down and thought about our parts, and re-wrote parts that didn’t work…

So did you take it more seriously, or as seriously as Baby Baby could take it?

Grant Wallace: Oh yeah, definitely. Because every song was like 12-15 hours straight, not leaving the studio sometimes until seven o’clock in the morning – just doing it until the song was right and finished. So it was a serious thing, but also really fun.

Do you guys do any writing in the studio, or is the writing and rehearsal process hashed out before you go in to record?

[Baby Baby]: I’d say it’s about halfway there, but once we get in the studio that’s when we start to, I guess, get more motivated to make it perfect.

Grant Wallace: We also kind of had a secret member on this one, Matt McClellan, who wrote a lot of the keyboard parts. He walked us, baby steps, to get the songs to how they ended up sounding. Because like you said, it was a big upgrade, sound-wise, to Money. And partially that’s because our fans gave us money to pay for this and actually make it sound like it was supposed to.

Did you do a Kickstarter campaign, or did your fans literally hand you money and demand that you do a better job on this one? [laughs]

Grant Wallace: No, no. I mean, they came to our shows, and that’s where the money came from. We took all the money we made from playing live in the last three years and didn’t take any of it for ourselves. Well, we definitely spent some money on whiskey here and there, but other than that…we put all the money into the studio. That’s why it sounds so much better.

That’s so smart, and I think a lot of bands aren’t doing that. They’re thinking, “Oh, great, we got paid. Party money!” And they’re not re-investing it back into their careers.

Fontez Brooks: We actually did a Kickstarter to fund this record, but we only made about $300 out of the $2,000 [we needed]. So we thought, ‘How are we gonna make this record?’ But we went out there like big boys, you know, and we had beautiful people who helped us out at the shows, so we thank each and every fan who came out to see us perform…

Speaking of shows, it would be hard to talk to you guys and not mention your live show, which is so essential to what the band’s about. Any plans to expand touring beyond the Southeast to support the new record?

Fontez Brooks: That’s the dream, sure. That’s the dream for all of us. It’s really hard at the moment, you know? We have to worry about things like the van not making it past Texas; we played South by Southwest two years ago and we broke down in Louisiana. But it was cool – we bonded, four of us to a bed. What are you gonna do? I personally want to go to Seattle. And I think L.A. would be cool. We’ve already done New York and Boston… 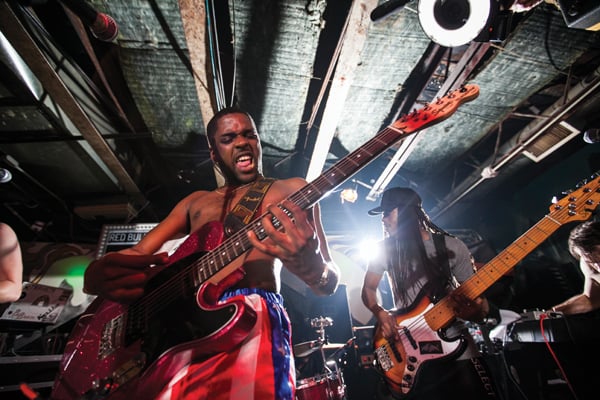 Do you still do all your own booking or are you working with a manager or agent on that part of the career now?

Fontez Brooks: I’d say Grant [Wallace, drums] is the closet thing we have to a manager right now. He does all the bookings, he even made this interview happen.

Grant Wallace: There’s something about drummers. I’ve talked with a lot of drummers and they all seem to have taken on booking responsibilities, as well…

Well, that’s because their job is so easy, isn’t it? [laughs] You hit a cymbal and you’re done, no? You’ve got nothing but free time on your hands…

Grant Wallace: It’s way harder to book shows than to drum, I’ll tell you that much! [laughs]

Do you see yourselves staying with the DIY mentality, or are you looking to add a layer of management at some point in the future to handle booking, etc?

Grant Wallace: Yeah, if anyone’s reading this and wants to help us out, hit me up!

[Baby Baby]: We had a manager for a while, but they basically did the exact same or less than what we could do on our own.

So there’s the better question: does any band at your level actually need someone to do the work for them that they could do themselves?

Grant Wallace: I think for a band our size, we’ve plateaued with the venues we can get into in the Southeast. And I think a manager or booking agent could open doors for opening for national acts. Which we still do on our own, but it could happen more often if we had a manager that was able to, by name alone, help us open for bigger bands.

You do have a publicist for this record. Is that new for you guys?

Fontez Brooks: We hooked up with Team Clermont, which is cool. And we’re thankful for everything they’ve helped us with….having the publicist, it’s great. They’ve got the resources to promote [the new record] and really hit the streets.

So there is an advantage for a band your size to go with a publicist?

Fontez Brooks: I’d say so. You can’t really email blogs these days, as a band. They just don’t care. If it comes from a publicist, they just listen more; they take it more seriously. They know the name and say, ‘Sure, I’ll put them up there.’

Grant Wallace: I think if you have that one catchy song, that’s all you need. You just need to have that one person to hear it and pitch it out…These are polished, catchy, great songs on the new record, so we’re hoping this is the one that catches somebody’s ear.

And if it does catch somebody’s ear, what’s your ultimate goal as a band then? What would be success for you, as far as this album goes?

Grant Wallace: Getting the van to make it to Boston without being afraid of it breaking down!

Fontez Brooks: I completely agree. To be able to do things like that, not have to worry about the van breaking down, or how we’re going to eat [on the road].

Grant Wallace: If we could play Europe and not go five grand into debt, that would be amazing.

Grant Wallace: We’ve got to write some more songs so we can record them with Ryan on keys, here.

Ryan Burress: I more or less came in after the keys had already been recorded on the album, so my first job was recreating what Matt [McClellan] had already done. In the live shows, I’ve been able to add my own things here and there, but no, we haven’t had a chance to write or record anything yet. My degrees are actually in writing music, too, so I’m excited to sit down with these guys, who I’ve been following for years as a fan, and see how the two minds can work together. The Baby Baby stuff with my more cerebral, music school kind of stuff; I’m curious to see how it all works. I don’t want to step on their toes at all. The Baby Baby formula is magic; you have to just feel it.