Home / New Music and Video / Interviews and Features / Get Behind Me, Satan: The Story of Acheron

Get Behind Me, Satan: The Story of Acheron 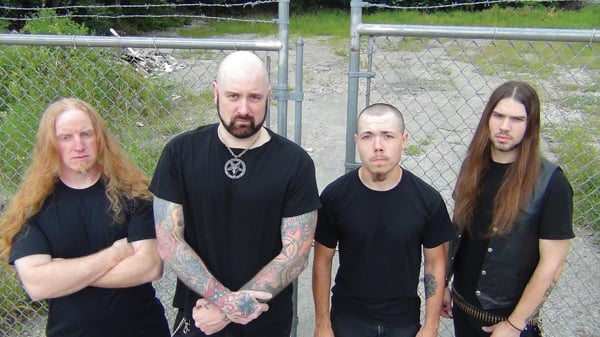 No other band keeps the unholy spirit of Satanic death metal alive in quite the sacrilegious light that Acheron does. Their latest album Kult Des Hasses, with its delightfully blasphemous and powerfully dominating sound, is sure to bring great joy to fans of black metal, death metal and occult-influenced music alike. Shrouded in the darkness of its sound – delivering crushing melodies, symphonic atmosphere and ferocious riffs combined with fiercely confrontational vocals, it is a perfect example of keeping the devil’s music true to its nostalgic roots as well as letting it evolve with innovation and maintaining its intriguing obscurity. The band’s current line-up consists of founding member Vincent Crowley on bass and lead vocals, Art Taylor on guitar, Brandon Howe on drums and Shaun Cothron on guitar. I was able to get in touch with Crowley to get some of the insights and ideologies behind the relentless fury that is Kult Des Hasses.

What can you tell me about how the sound was established on the new album?

There’s so many bands that try to get that new sound, you know that metalcore bullshit and stuff and I said I want to be true to the art, I want to get something that sounds like something that came out in the early ’90s, late ’80s.

This has been happening for years where people have this stick up their ass where they have to have the fastest fucking blast beats and sometimes you put on a CD and it’s like jacking off the whole time to the same speed. We didn’t want that. Every song has a little something different but it’s all pieces of a puzzle as well, you know? Art’s main influences are a lot of my main influences. He loves Mercyful Fate, Candlemass, Black Sabbath and stuff like that. With all of his doom influences, Art kind of did some bluesy, eerie stuff on there and it all just worked out fucking good, man

One thing about Acheron is if you really listen to the structure of our songs, heavy metal is our roots, you know what I mean? We just play it more aggressively. I think this album is like a mixture of the best stuff on all our past albums stuck in a fucking pot, and that’s how we plan the next fucking album to be: the same fucking way.

So we can expect a new Acheron album in the near future?

2015 we’re going to start touring for this album again because we didn’t really give it a push at all. We haven’t played since December of last year (laughs), so we’re going to resolve that problem by doing a bunch of shit next year and hopefully we’ll be in the studio [then], as well. What were some of your biggest influences growing up?

When I was a teenager I discovered Venom, Bathory, Celtic Frost, Sodom and Slayer and that just put me on a whole other path I never got off of. One of my biggest influences is without a doubt King Diamond. Mercyful Fate to me is just so iconic for music based around the occult because I like Venom and I appreciate it but Venom, despite being a huge influence, kind of had that ‘comic book’ attitude when they did interviews; but when I saw a King Diamond interview it was always so poignant and intelligent. I always wanted to be in a band like Mercyful Fate, a band that really inspired me and still does in a profound way.

How would you describe your time in the studio recording Kult Des Hasses?

I can say honestly it was the worst experience recording I’ve ever had in my whole career. I think my vocals captured the anger quite accurately, which was good. It captured my favorite vocals so far [though], so I guess I’ve got to get pissed off more often (laughs).

What is your definition of true Satanism?

I was a member of the Church of Satan for over ten years. At one point I was fighting for Satanism to be a religion and to this day I wish I had never done that because anything that calls itself a religion is toxic. That’s why I’m no longer a member of any organization even using the word Satanist. I always say I’m a heathen who lives a Satanic life. I’m not trying to promote Satanism to become a sensationalized religion or whatever because I think it’s just a strong philosophy.

In the long run, no, it’s not a religion, we’re not bowing down to any fictional deity so all of the Satanists who fight for a crusade to make it a legitimate religion, eh, have fun because I’m not going to have anything to do with it (laughs). It’s just become a big fucking joke, really. I still believe in the same shit and I still practice the same shit I always did, and I still practice the occult and black magic but that’s all personal. I don’t need some motherfucker to pay a membership fee to find out about it.

What does a typical day in the life of an underground musician consist of?

Playing this type of music, people always seem to think anybody who has released albums don’t have day jobs and they live off of royalties and shit like that. Well I’m sorry to fucking say that’s not the case. I know a lot of motherfuckers out there that are doing the SAME FUCKING THING AS ME (laughs). We bust our ass on our regular job, we bust our ass in our fucking band, when we go on tour we’re usually just taking our fucking vacation time to go do stuff and it’s like people say, ‘They act like rock stars.’ We are about the furthest fucking thing from a fucking rock star that there can be. We are working-class metal; we do it because we love the fucking music. We don’t fucking do it because there’s any money it but because we fucking support and enjoy it. Overall, it’s been very rewarding being a working-class musician. Metal saved my life. Because I’ll tell you, I couldn’t imagine the magnitude of my hostility if it weren’t for a release like that and I’ll always be grateful for this kind of music and being a part of it is a very natural thing for my persona.

What does Acheron stand for to you?

When I originally put this together it was supposed to be more than just a metal band, it was supposed to be an extreme form of art that was intended to put Satanism in motion. It was derived from Satanic thoughts and experiences so the subject matter of what I wrote about was intended to give people that feeling that what they were receiving was the real deal, you know?

People think being in a Satanic band consists of nothing but screaming Hail Satan all the fucking time and it’s not. Being Satanic simply means being true to yourself and just letting it flow out of you no matter the consequences. When I did the song “Fuck The Ways Of Christ” I never would’ve thought that would be the song people would be fucking yelling for us to play live. “Ave Satanas,” that’s a song people responded to. People say the lyrics have personal meaning to them like an anthem. It’s like some of these songs, they go beyond just something to listen to while they’re driving their car, they think of it as the soundtrack to their fucking life and that’s awesome! It’s pretty fucking special when someone takes what you’ve written and uses it for something like that.

I just think that Acheron is basically a Satanic entity that produces real music and no one tells us what to do, no one tells us how to act no one tells us what to put on our albums. Everything is 100% Acheron. I don’t care if someone said here’s a million dollar contract, you guys have to focus on other lyrical content, you have to change your logo and modify your sound and your image, I’d tell them to fuck off. Sure it’d be nice to have a million bucks, but your integrity means more and that’s what this band stands for to me personally.