Home / New Music and Video / Interviews and Features / COVER STORY: Rubblebucket Opens Up About The Making of ‘Sun Machine’

COVER STORY: Rubblebucket Opens Up About The Making of ‘Sun Machine’ In the days leading up to the release of their latest album, we sat down with the creative force behind Brooklyn’s Rubblebucket, vocalist/sax player Kalmia Traver and her musical (and formerly romantic) partner Alex Toth (trumpet/vocals). You’d think that after all the pair has been through, there’d be an uncomfortable “Fleetwood Mac post-Rumours” type of vibe in the air. But if they hadn’t announced their (romantic) breakup, you’d never suspect the two had gone through anything vaguely upsetting in the recent past.

We know that’s not the case, though. Since we last spoke with the band in 2012, Kalmia has battled ovarian cancer, Alex got sober and the two broke off their three-year-long relationship. What resulted from all of this personal turmoil is Sun Machine, a decidedly non-breakup sounding LP that elevates the band’s previous work while seemingly solidifying the duo’s remarkable working and creative partnership. Through it all, they’ve made the best album of their career, and we wanted to learn more…

So, catch us up on the past six years since we last checked in on Rubblebucket…

Kalmia: Well, where to begin? [laughs] Five years ago, I got diagnosed with ovarian cancer. It was really scary, but I think that I identified this feeling that I really wanted to go through it with our band because those were the people who I’d formed this community with. And it felt like an opportunity for growth, so we were pretty public with everything that was going on about the treatments and everything else.

We actually went on the road pretty soon after. I got diagnosed in June of 2013 and spent that summer doing surgery and chemo. But we were on tour by October and went through the whole fall. Which was crazy, because I had no hair…

Were there any physical challenges to touring so soon after surgery and treatment?

Kalmia: It really permeates every aspect of my life, it was such a transformative thing. At that time, in the early stages, there were many physical challenges. The way I describe chemo best is that your body’s battery charger is down to 10%. Your energy is so low…in a sense those chemicals are killing you. You can feel the painful aches in your bones and it’s pretty intense.

Alex: We researched the arc of the treatment, and I remember that she’d done a couple cycles before we started touring and we specifically planned when the run would start based upon the cycles and how she’d be feeling after and before.

Kalmia: We had a few show opportunities, and if was a couple days before a treatment, that was fine. Your body kind of springs back after a few weeks…

Was there ever a point where you couldn’t perform?

Kalmia: Oh, for sure. But like Alex said, we tried to plan it out and were kind of playing it by ear with what the doctors said about how it was going to go, since I was a strong person — healthy and young.

Alex: The doctor came up and was basically saying not to let it get you down, and to keep going with your life. And I think that helped us to say, ‘Yeah, of course we should tour.’ Have your personal experiences informed the creative process at all since then?

Alex: Oh, it changed everything. After that moment [her diagnosis], we walked around and realized it was this life-changing thing. That same week, Communion Records said they wanted to sign us and asked if we wanted to play this festival with Mumford and Sons, and ever since then it’s been this gradual transformation process for the both of us.

And that includes our approach to songwriting – getting healthier and waking up to stuff. It sent me into sobriety and to a meditation retreat and I started doing this a song-a-day process. Before that I wouldn’t finish songs, and I’d wake up with a beer in my hands. My whole process changed after that. In this weird way, it was this purifying thing.

Kalmia: Before that, I was devoting my whole life to Rubblebucket, throwing my entire body and will and every last drop into it. And through that, on the other side, I found I was more wanting to pour myself into health, and being healthy enough to be present in everything. My day job became being healthy and being alive, and the creative work was almost a byproduct of [that].

What does the songwriting process look like for the band now, in the wake of all this?

Kalmia: It’s a little bit of everything. For Alex and myself, we always loved to hand stuff back and forth to each other, a little seed of an idea, or a melody or even a whole song and throw it to the other person to see what they could add. A lot of music on this album was done in that way. But then at a certain point, we started to split up and write whole songs separately, but still contributed to each other’s music – especially in the recording where we’d add little synth parts or arrangement ideas here and there.

Alex: On this record, it encompasses the full spectrum of what Kal and I have explored up until this point. Pretty much all the songs, we both get our hands on them for arrangement and production details. But even with that, certain things might come to the table fully fleshed out and other things might be a case where the full song is written but we’re figuring out how do we want to turn this into a Rubblebucket song?

Kal’s first day of chemo was my first day of sobriety and that was when I started the song-a-day process. And that was from 2013 to present, the first three weeks I went nuts. It was almost a way to process all the emotions, and since then I’ve continued the process. What it involves is giving yourself a time constraint and writing two verses of lyrics and a chorus, and melody and form and committing to that. Not adding any production – no drums, no bass. Not worrying about compression on the vocals, or reverb…just get the guts of the song out in the most basic way possible.

Because what happened to me, was that I’d get inside the computer and start to think about hi-hat patterns, and by then you’ve lost the song before you’ve finished. It was always a way for me to avoid finishing the song; maybe I was scared to finish it or something…

It forced me to say, ‘Commit, commit, commit.’ It forces you past this layer of self-judgement and really helped me break through. The majority of our last record came from the song-a-day [bounces], actually. Kalmia: It almost releases you to a more pure state of your playful self, past the self-editing part…I do drawings and visual art a lot. And now I have this outlook where I’m trusting my own brushstrokes. Whatever my hand wants to do, I trust that it’ll be cool, and it really has helped my open up with writing songs and making music. It’s just a little playland if you can get yourself into it.

Kalmia: The studio has become one of the most joyful parts of being in a band and being a performer. The studio becomes the playland, where you have all these toys and it’s almost like creating a sculpture or painting of sound.

We’ve recorded all over the place, including our bedrooms and own home studios. And I’ve learned a lot of how to capture the moment by doing that. Having the ability to record in my own bedroom with nice gear has allowed me to really understand what that means.

Alex: One thing I’ll say to any band is to learn how to use Pro Tools. It’s an empowering thing for all musicians. It makes going into the studio less scary now, when you know how to take the session home and edit it by yourself without having to rely on another person. Some things are so hard to put into words, like ‘Hey, can you make the magical component of that a bit more radiant, somehow?’ [laughs] Some things are so tactile and if you’re doing it yourself, directly, you’ll bump into the right thing on your own much quicker than trying to translate that into words for someone else. 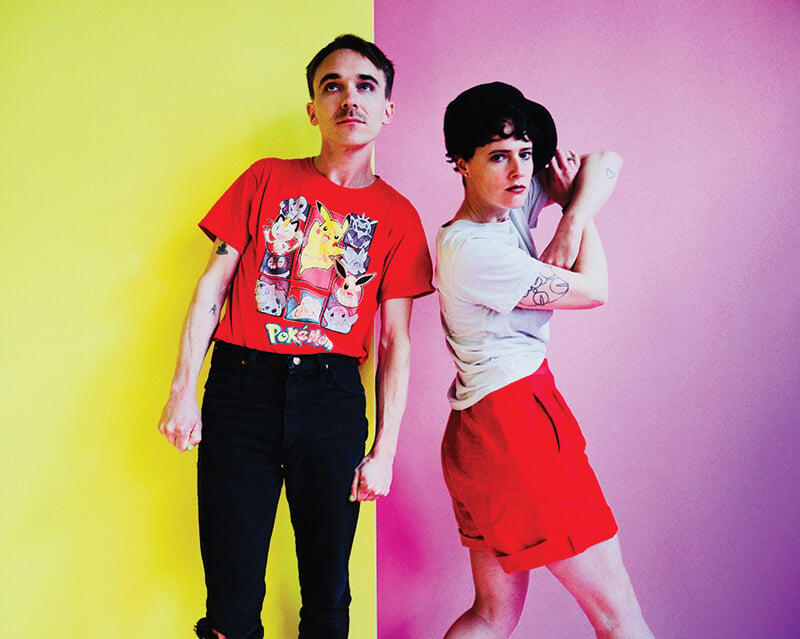