Catching up with Satellite Citi Satellite Citi Guitarist Shaunt Sulahian on Rocking as a Two-Piece, Armenian Heritage and Sounding HUGE with a Strat

The hard-rocking LA duo Satellite Citi first came on our radar through Instagram, where we noticed a lot more volume coming from our speakers than the two-some would lead you to believe themselves capable of.

Drummer/vocalist Anna Gevorkian and her partner, guitarist/vocalist, Shaunt Sulahian have made quite a name for themselves in their native LA stomping grounds, and their latest LP Fear Tactics is a fantastic representation of their aggressive sound on record. We recently caught up with Sulahian to discuss the band’s origins, their Armenian heritage, and how they get such a massive sound with just two band members.

Let’s take it back to the beginning for folks who maybe aren’t familiar with the band. Can you give us a sense of where you came from, where you grew up and how you first got involved in playing music?

Yeah man, definitely. I grew up in Los Angeles and I went to Cal State Northridge, and I met Anna while I was in college where we kind of started like this little acoustic project.

We were just kind of having fun; I was in and out of a bunch of metal bands and I realized she has an incredible voice. And she also plays drums. So, I said, ‘hey, have you ever tried singing and drumming?’ and she said, ‘no, that’s a little crazy.’ [laughs]

But she started drumming and singing and we were quickly writing full-fledged rock songs instead of the more singer-songwriter stuff that we used to do. And yeah, then we just kind of went off from there. We put out our first EP in 2018 and we did a [small] California tour and then we just released our debut full-length record in September.

Awesome, so quite the transition from a more acoustic duo to what you guys are doing now.

I would say we were both on board with kind of making the move to a harder edge [sound]. I think that I come from a metal background and Anna comes from more like a funk, alternative rock place and so we kind of thought, ‘Let’s just combine our influences and see what happens’ and [Satellite Citi] just kind of came out. We just realized the songs we were writing were getting heavier, darker lyrically. And I just missed writing riffs, I guess. So, we combined it all and Satellite Citi was formed.

You’ve also got kind of two…mysterious figures? Shall we call them…

Well, uhm, right now it’s going to be three ‘space walkers,’ we call them. We got one on keyboards now and yeah, we don’t reveal their identity. They’re just incredibly talented people that we choose to work with and at first it was kind of like a joke. Like, ‘imagine our friends dressed up in astronaut costumes and putting them on stage — it’ll give more of a theatrical experience to the audience’ and so far, people have been loving it.

And for the past year, we’ve been writing a graphic novel that kind of focuses on the spacewalkers. It’s kind of like a sci-fi fantasy novel, and then we’re going to release a concept EP to go along with it.

Wow, very cool. So, the spacewalkers are a part of the group now; do they record with you?

No, just the two of us [in the studio].  I think having the two-person band, it can kind of sound flat on stage sometimes. I kind of just wanted a thicker sound [live], honestly, like a bigger landscape that goes down and on top. Awesome, so let’s talk about the record. Can you elaborate a little bit on what your songwriting process looks like?

Every single song on the record and every single song we write in general is written collaboratively with me and Anna. She usually writes the lyrics and melodies, and I’ll write the guitar [parts] and then she’ll add some drums to that. There have been instances where she starts with the lyrics, and then I’ll try to write guitars to her lyrics.

But yeah, it’s mainly just me and her.

Sometimes we just jam for a few hours and see what riffs and cool stuff we can come up with and then we sit later on and add onto that without the drums…try to write melodies to [what we’ve come up with].  I think the key there is just changing it up and not staying stagnant with one songwriting strategy, so that things can stay interesting.

How have you released the new record? Digital? Vinyl? CD?

We’ve done it all except vinyl, but we’re working on [that] right now.

How did you two record it? Because you know, I’ve seen some of the names involved in the production, and these folks have worked on Smashing Pumpkins records, Pixies records…

So, we worked with Brad Wood for this record, and he also did our first EP Negative Space. e’s just an incredibly talented human – we did a lot of pre/pro with him, and he came to our place, our rehearsal studio, and he kind of broke down some songs [with us]. 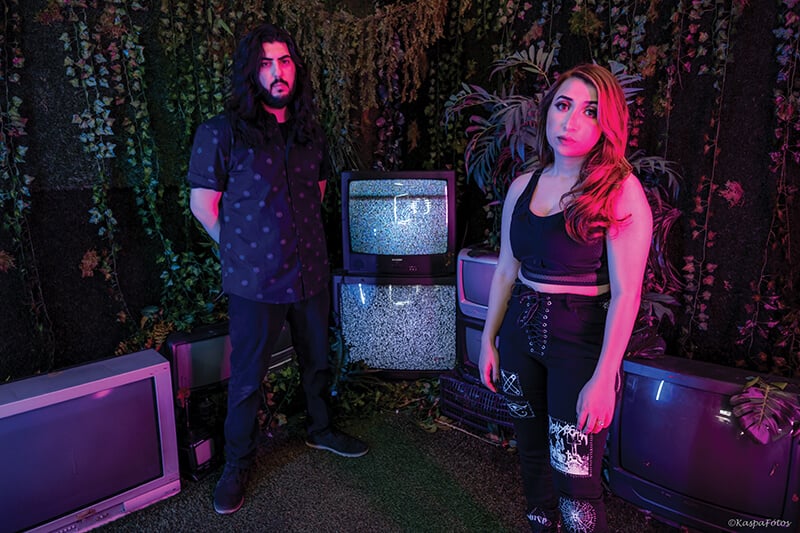 We’ve been working with him for so long now that our chemistry is pretty great. We write a lot and sometimes it gets too repetitive. He’ll call us out on that and then we’ll go back and we’ll kind of workshop it a bit more. That’s a good person to have working with you.

I know I want to be challenged. And I think same with Anna, you know? And then the more we’re challenged, the more creative we can get.As far as recording guitars, it’s just straight through my head down through the cab and then a few different pedals. Maybe Brad will go in there and mess with the plugins and mess with the reverbs through the DAW, but I just did the whole record through a Peavey 3120 head and a Mesa cab.

And what guitars are you using?

Just my Strat for the whole record. It’s an American 2014 Strat. Yeah, I’ve literally had that thing for like 6 years now – stock pickups, single coil pickups. It’s got a great big sound for single coils

I would like to touch upon one last thing here — I’ve noticed on your Twitter and some of your merch you’ve got the colors of the Armenian flag. Do you want to touch upon your shared heritage and what that means to you as a band?

Yeah man, for sure. It’s definitely a big deal for us. Last year, this time Armenia was at war with Azerbaijan and Azerbaijan was kind of committing war crimes against Armenia and we were trying to bring attention and awareness to that, so we released our song and music video “Antibody” that features BrandonYeagley from Crobot. And there was a ton of symbolism and meaning thrown into that video — it was directed by Rosie Geozalian.

And yeah, we kind of had coinciding merch to go along with. That was just our little way, our campaign to bring awareness to [the situation].  But yeah, man, always trying to bring more awareness to the Armenian genocide that started in 1915 against Armenians by the Ottoman Turkish Empire. That’s just something that still hasn’t been resolved for us yet…Turkey continues to deny it, and it’s just the generational trauma that lingers in all Armenians.

Are there any sort of resources or websites for people to check out to learn about the issue?

One is definitely the Armenian National Committee of America at www.anca.org. OK, they keep you updated in regards to news, current events and what’s happening with Armenia [today] and any updates with Azerbaijan that’s in conflict with them still.

That’s the main source that I’d go to [for a start].

Sadly, most of my own knowledge on the subject comes from a TV special that Conan O’Brien did where he traveled to Armenia with his assistant, Sona Movsesian.

Oh no, I love that, man. No need to apologize. When he did that, you know, that was a whole event for our families, by the way. Like really, Armenian families sat around their TV’s and watched that episode of Conan, OK? Because it was a huge deal – this American celebrity of that caliber going and bringing awareness to Armenia and the [issues]…That was pretty emotional for all of us. It’s a huge deal still that he and Sona [did that].

And with that, we said our goodbyes to Shaunt – but you can catch more of the band on our YouTube channel, as well as their website at www.satelliteciti.com