Home / New Music and Video / Interviews and Features / Best of 2014: Get to Know Wampire

At Cackalack’s Hot Chicken Shack, a food cart in southeast Portland, Eric Phipps is running on E. As he cooks up boneless fried chicken breast, among other gravy-laden delicacies, the frontman behind Portland’s own Wampire is thinking through the details that make up his album-in-progress. He’s renting a tiny room in a friend’s warehouse that he’ll run to around midday from Cackalack’s to size up what he wrote the night before. The stop is brief but builds enough momentum, if only out of frustration, to keep him going through his second job at Double Dragon, a Vietnamese banh mi bar and restaurant two miles down the road. For his standards, he’s behind. The ideas are there, but they aren’t turning into anything as far as songs are concerned. The five-piece behind Wampire, an ’80s synth-pop group that was born out of Phipps’ longtime friendship with co-founder Rocky Tinder, is leaving for New York soon to record, and Phipps has nothing to show for it. The next day, he does it all over again.

Sporadically, Phipps comes to the warehouse to play the song back. Records a new layer. Erases another. Sits back. Wait. Don’t touch anything. Leave and don’t do anymore. The next day he takes a listen. It’s hard for him to think of where “it” came from but to him it doesn’t matter.

“It’s not worth it to not work this hard,” he tells me over the phone. Looking back on the experience, Phipps understands that he works well off the mania. “You either have to do it or you don’t,” he says. “I was just going to no matter what, even though that meant going to hyper mode and act[ing] like I had a year left to live.” 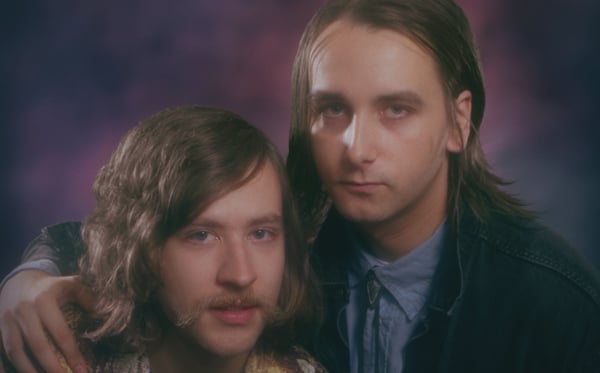 For Phipps, the creation process unearthed in him what he describes as a “Kafka-esque insomniac musical novelist.” Whatever metamorphic frenzy Phipps found himself in was lucrative as far as songwriting goes (considering Wampire’s fantastic debut, which was a five-year-long undertaking). The metaphysical backdrop against which Bazaar is set is something Phipps and his bandmates can stand behind, and the harrowing soft and gothic noir that emerges is quality.

Now, with the LP out and tour dates in queue, the group feels confident getting their tour legs on. Their specific brand of off-kilter synth-pop, laced with fantastical elements and hints of paranoia, has gained a diverse following since its debut LP Curiosity dropped in 2013. Before highly refined tracks like “Wizard Staff” graced the Internet, Wampire made itself known as a staple in Portland’s house scene with dreamy surf-pop melodies and makeshift iPod backing track tactics (along with habitual performances in their skivvies, but Phipps and Tinder try not to revert to darker times).

The band is currently wrapping up a tour playing alongside English indie-psych rockers Temples. Immediately afterward, they have their North American tour to focus on. As the boys make the 14-hour drive from Phoenix to Boulder, Phipps assures me that everyone is in good health and raring to go — they have a Red Bull hookup. Touring essentials aside, Phipps credits the luxury of having their own sound guy in tow as a major upgrade. “It usually doesn’t work [otherwise],” he says. “We’ll show up at the next stop and there’s a new sound guy who we’ll have to explain everything to in maybe, five minutes?” This common frustration for independent musicians is one offset by conquering the beast of producing a sophomore album. The group, a duo turned five-piece, got a significant boost with the addition of Thomas Hoganson to the songwriting and recording process. To supplant his contributions on piano and drums, Hoganson doles out the wildly underrated smooth sax, making Bazaar Wampire’s most gratifying set of songs yet. Recorded direct-to-tape at Brooklyn’s The Museum, with Unknown Mortal Orchestra’s Jacob Portrait behind-the-scenes, Bazaar reaps the benefit of a still blissed-out yet ripened version of Wampire’s earlier self. The same hazy, bleary-eyed tendencies are there, but discipline exists in places where Curiosity fell short. The band stirs introverted, fun house vibes with the album’s opening track (“The Amazing Heart Attack”), while “Wizard Staff” pulls in the sort of funky overtones that make Wampire excel.

Any misgivings on the cross-genre workings of Bazaar are unmatched by the boys themselves. The unassuming fans that materialize as a result may be the more striking component to Wampire’s success. Phipps recalls a superfan from L.A. who stands out in his mind: “There was this one crazy guy with a lip piercing, looking straight out of a ’90s hardcore video. And he’s holding this sign where half of it says ‘WAM’ and the other half says ‘PIRE,’ and he wanted to bring it to us.” The sign is pretty impressive. An 8×3 inch cardboard sign with blood red letters detailed with white drop shadow and, well, vampire-y typeface. “It was so sweet and so bizarre that this guy is into our music,” Phipps says.

He can’t exactly gauge where the fandom stems from, but never sounds ungrateful. Even for the kind-of drunk influx of rock-and-roll dads who may not necessarily know which band they’re seeing.

“Just last night we were selling a record to this guy… he walks off and he’s like, ‘Oh thank you guys, thank you.’ And then he comes back and he’s like, ‘Actually, uh, I wanted a Temples record, um, so… can you just take this back?’” Phipps and his bandmates share a laugh. “‘Dude. Dad’s night out, you know? You gotta watch how much you drink man, like, go home — take care of the kids.’”

But they’re good sports. And when the crowd is good, they know it. When I ask Phipps about his most memorable shows thus far, he’s not thinking about a sonically flawless set. “Not necessarily perfect,” he says. “The notes are all there, but there’s a singular sort of vibe to the show. You have the right energy, we’re stamping around — we feel natural. That’s the thing that make me happy.” That, he says, and when slapdash comments are yelled from the audience. Like bros yelling “STEVE HOLT” mid-show.

As the group heads closer to Boulder, where they almost certainly will have no fun (the surreal psych-pop jam “Too Stoned,” again, being no indication), the mood is pleasant. Phipps is bummed to end their run with Temples, but ready to “relax” in Colorado and, despite having just started the tour, get back into the studio. “I don’t get bored,” he says. “It’s never, ‘Oh god I have to write another song, it’s going to sound like that other song.’ It’s exciting to go back into recording because I never know what’s going to come out.”

“We’re actually almost out of Red Bull. We’ll have to find a new kick.”