Home / New Music and Video / Interviews and Features / From Gavel to Hoodie: The Story of Attorney-Turned-Rapper Gilles

From Gavel to Hoodie: The Story of Attorney-Turned-Rapper Gilles Gilles, the rapper/lawyer who was born in New York and raised in Atlanta, is a man and an artist who embraces duality. From the young, black, and successful swag of “Righteous Ratchets” to the smooth and lost-in-thought finesse of tracks like “Future 4 Wii” and “Queens and Castles” off of his most recent release Super, Gilles paints a picture of a blue-collar guy navigating and coming-of-age in the white-collar world.

Gilles is currently wrapping up work on his next album, due out this July, and explains the balancing act of being a working professional and a creative individual: “One necessitates the other, because I fund my art from work. So, that’s the practicality of it.”

He continues, “And particularly with this project, there are so many things that I would not have been able to do if I was not an attorney. One, being an attorney has allowed me to have a skill set that I can barter. One of my frat brothers is an engineer, so he records music. But he’s a really good one that works all the time and is expensive. Because I’m his attorney, when he needs work done I can do work for him and when I need work done, he does the work for me.”

Gilles explains further, “I’ve also been able to secure some features for this next project, based on legal relationships. Also, often, at least half of the time, I’m doing entertainment work. I see production agreements, feature artists’ agreements, and publishing agreements. So, I see all these things and it also helps me to be informed about the industry that I’m in.” When discussing his music and his specially-honed (for an independent artist) image, Gilles explains that he remains conscious of what he puts in the out in to the ether: “If I think its dope, I’ll put it out there. But that’s not just with the music; it’s how we plan events, it’s Instagram, it’s Facebook or whatever. It’s about always presenting a quality product. It’s about presenting something, that is to me, dope.”

He goes on to say, “But as far as the music that I put out, it’s all based on my likes and what I’m feeling at the time.”

He also discusses his influences and studio process, citing a wide range of rappers and styles including Kanye West, 2 Chainz, Project Pat, Jay-Z, and Outkast as inspirations. “I try to go to other art forms, because if you named a musical artist, I’m probably going to say, ‘Yeah they’re good,’ because there are very few people that I don’t like.”

So, with visual art, there’s the guy who designed the cover art for my album Super, his name is Jermaine Clark, he’s dope. There’s a guy Fahamu Pecou, he’s a local artist and he’s dope. There’s so much out there, I went to Art Basel last year and that was a real dope experience, just being around art [for] five days. I like to create and I like to be around creators,” he adds.

On recording Gilles explains, “It’s not the same every time, but it’s definitely a beat or record first; I hear the music then say, ‘What to do, what should I say,’ then I start writing. I usually write on my phone or computer. Once I figure out what the song might be about, I’ll try figuring out how to piece it together, like how I should sound on it. Every now and then I just feel like I have something to say. I’ll have this energy and I’ll go through some beats until I find the right one it just kind of comes out.”

He adds, “I might enjoy performing more than I enjoy recording. There’s nothing that brings me joy like rapping in front of a bunch of strangers. I don’t know why it does, but it does. I love making people believe. Like they come in skeptical and leave like, ‘Okay, that was okay.’ I’m just comfortable and like being on stage.”

He then proceeds to describe his upcoming project, “This project is based on me just turning 30, so I want to [do] thirty minutes of music for my thirtieth year on earth. With the music that’s on this project, there’s an underlying feeling of frustration. You know, frustration shows itself in a lot of different ways and comes from a lot of different things. There’s civil unrest and if you’re Black you’re seeing all these things that have been going on forever, but it’s popping again. Like its cool to kill Black kids in the street, so that’s one thing right?” 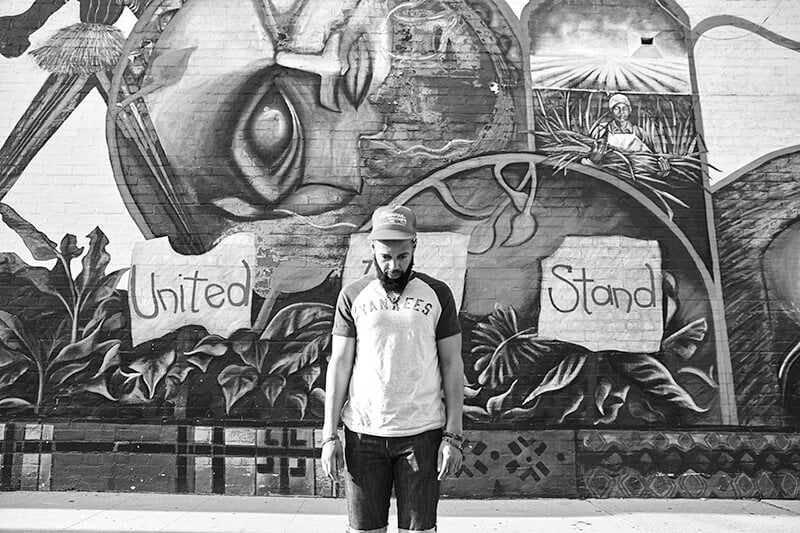 He goes on, “Then I look at how people perceive me and this goes for both professions. As a rapper, people perceive me as a lawyer trying to be a rapper, which is not what it is. I’m just both. People will say that’s dumb, why would you want to do this? If I was a chef that could play the piano, they’d be like, ‘That’s a talented guy,’ but since I’m a lawyer that makes rap music, it has to be more confusing; it’s like I have to pick one, this doesn’t go.”

Ultimately Gilles refuses to be characterized in narrow terms, instead choosing to identify himself in a much more dynamic fashion. “I don’t want to subscribe to that. I don’t need to look like this in order to be what you want me to be. As a rapper I’m supposed to embrace the struggle, supposed to work at Jimmy John’s or Macy’s; I can’t have a job with an office.”

But his law career is what affords him the artistic freedom other may not have. “When in reality, that’s the reason why I can kind of be free. I’ve seen it so many times, artists that are down on their luck are more inclined to take whatever is offered to them, because they don’t have an option. I’m not dependent on a rinky-dink record label to maintain my livelihood. So if I don’t feel like the deal is right, then I can say no,” he explains.

Casually dressed in a hoodie, rocking a long beard, Gilles details further: “I get it from both angles because I’m a lawyer that looks like this. This is what I wore to work, a hoodie and some sneakers. I actually met with a client today. I make a conscious effort to actively break stereotypes or preconceived notions.”

He continues, “There is a time to be in suit, but you don’t have to wear a costume to get credit for what you actually have. This week has been an awesome one for me as an attorney, we filed a motion to stop a bank from foreclosing on a woman’s home in federal court and they granted our motion. So one, the lady’s home is safe for now. Then today in the federal court of appeals, they ruled in our favor on a brief. So, basically we get to try our case now and there was a lot of defendants and some big firms that we were fighting against, but we won. I say all that to say, the same guy who makes rap music did that. The same guy who wears hoodies to work, did that.”

Gilles’ new album A.L.O.T. (A Lot Of Things) will be released this July.