Rarely does a manufacturer receive a standing ovation from its users but the PreSonus® team received a heartfelt and enthusiastic one at the closing ceremony of its third annual PreSonuSphere user conference. 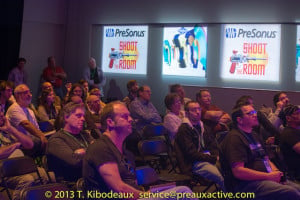 PreSonuSphere 2013 brought 450 musicians, producers, engineers, and other music-business professionals from all over the globe to the beautiful Manship Theatre at the Shaw Center for the Arts in downtown Baton Rouge. Attendees sold out two hotels and filled numerous area restaurants while enjoying Southern cooking, Southern hospitality, crowd-pleasing music, informative educational seminars, and seemingly endless networking opportunities. Multitrack recordings of performances by L’Angelus were captured live to Studio One, and attendees were treated to an up-close and personal journey from recording the first riff all the way to final release on Nimbit. An assortment of partner companies staffed booths where attendees could check out their products and ask questions.

Friday night’s highlight was a high-energy set from Lafayette, Louisiana, rockers Royal Teeth, which brought the crowd to its feet.