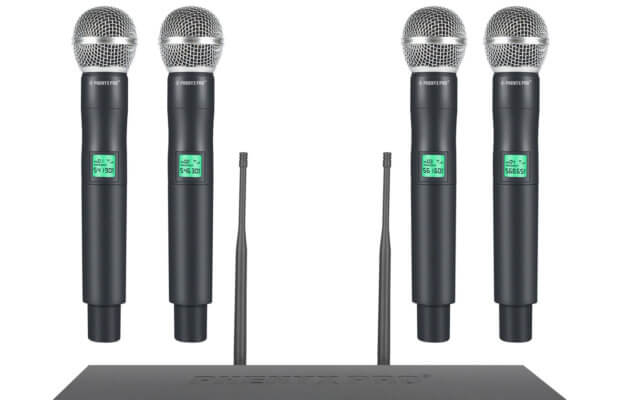 In the past, running multiple wireless microphones usually meant hodge-podging several independent systems together and hoping there was no cross talk, or buying a configuration that was only available for the high-end stadium acts. Phenyx has figured out how to get a 4-mic wireless system together under $200 with their PTU-5000a. So, how did they do?

The brains of the operation is the simple one-space receiver unit. On the front panel displays for the signal and audio strength for all four devices are well lit, and each channel has an independently adjustable volume control. The rear panel has four XLR outputs and a single 1/4” output that has a mix of all the mics for running into a separate system. Antennas are also located on the rear panel. Our package included four cardioid capsule equipped microphones, each running off of two AA batteries (included).

Four color-coded anti rolling collars can designate whose mic is whose and keeps them from rolling on to the floor. A small, well-lit display on the handle displays channel designation signal strength and frequency. The microphone has a decent quality to it mechanically, and certainly doesn’t feel ultra-cheap. The system can also work with other Pheynx transmitters, such as belt packs.

Range maxes out at a range of 260 feet according to the manual, and we had no issues with the range of the system during our test. This should fit well in stages/performance areas of a reasonable size. In an outdoor setting, it might be better to have the receiver on stage, and run the cables to the FOH mixer, just to ensure signal strength.

Hooking everything up was a snap, and overall audio fidelity is good — there was no issue on crosstalk or any signal disruptions. The microphones were quite robust, and the battery life seemed to be very reasonable with about 7-8 hours of juice, meaning if you or your roadie forgets to replace them once, you should still be all set.

Ideally, this is a great setup for conferences and conventions with multiple speakers. A hip-hop group with four performers could easily make this work for a nice and hassle-free setup. With a pair of belt packs, these would work wonders for instruments, as well.

The only concern is the placement of the antennas; this is a pretty shallow rack unit, depth wise. If it’s mounted in a deep rack unit, the antennas might not be able to be extended enough to be in line of sight of the transmitters and could in theory cause issues. We had ours sitting on top of a table with no issues, but that defeats the purpose of being a rack mount unit.

It’s a nice and simple all-in-one rig for the budding wireless groups out there; even the batteries were included. For performers who want to go wireless without a lot of fuss, this could be their first system, and it’s certainly not a bad entry point.

if it’s installed in deep rack, antennas might not be able to be extended fully.