Tablet schmablet. You can have the fanciest lookin’ device on the planet, but if there are no killer apps for it, it’s just a useless hunk-o-junk. So now that you’ve got that shiny new iPad, how are you gonna make the most of it? Well, we recommend a few products and apps that will help you maximize your iPad; some of these tools will help you make music, and some of them will provide more educational benefits. And yes, you can still play Fruit Ninja while you’re supposed to be working – we won’t tell. “JAM brings the legendary sound quality of Apogee to iPad, iPhone and Mac for just $99. Now guitarists can have a pocket-sized, plug in and play interface at an unprecedented price and experience ultimate tone with the guitar amps and effects in Apple’s GarageBand software or other compatible applications. JAM is a premium digital converter and instrument preamp featuring Apogee’s PureDIGITAL technology. PureDIGITAL means no noise just great guitar tone. You will notice the sonic difference between JAM and other similar products immediately. JAM features an input gain control knob. This rotary style wheel is conveniently located on the side of JAM for easy thumb access and allows you to dial in the level of your guitar without accessing software.”

JAM is super easy to use, and that’s key in the tablet market. We’ve seen some clunky devices that are so difficult to figure out, they’re not even worth the effort. The LED indicators give clear signals when the unit’s ready to use, and we like that it’s not trying to do so many things at once that it doesn’t do anything well. It’s designed for bass and guitar, and handles active and passive pickups equally well. The input/output options are mind-numbingly simple, and the low-noise levels really impressed us. If you’re looking for a headache-free device to plug your axe into your iPad, the JAM is incredibly attractive and fairly inexpensive, too. “iTrack Solo provides the best solution for recording your instruments and vocals using an iPad. Featuring a Focusrite microphone pre-amplifier and an input to record directly from electric and bass guitars, iTrack Solo is the perfect way to expand the audio capabilities of your iPad using Garageband or any other music-making app.

Although it is an Apple certified ‘Made for iPad’ device, iTrack Solo is also fully compatible with your PC or Mac computer and comes with a host of free music making software including Ableton Live Lite and the Focusrite Scarlett Plug-in Suite. Just connect your iTrack Solo to a power supply and an iPad and you’re ready to go! With the very best in digital audio technology encased by a rugged aluminum unibody chassis, iTrack Solo will capture and playback your sound with pristine quality.”

We love Apogee’s JAM, but this brings just a little more to the game if you need it. You get the added benefit of direct headphone monitoring with level controls, and the bonus of an XLR input for vocal mics or for recording instrument cabs. What we really dig is the front-facing gain controls, which have a neat green halo when your levels are OK, but then turn red when you start to overload or risk clipping. A nice touch, and handy to have in such a visually-intuitive feature. Along with standard digital outs, you also have a pair of RCA connections that allow you to plug into a stereo for real-world listening to your tracks. Seamless wired to wireless iPad control allows a user to mix from anywhere in the venue, providing the mobile freedom to control not only the mix, but also powerful plug-ins like EQ, dynamics, effects and more. The sleek DL1608 even supports up to 10 iPad devices so musicians can control their own monitor mix on stage.”

Mackie’s new DL1608 live mixer is the killer app for the touring band that wants great sound, and the ability to control and shape that sound, onstage, in any live setting. Featuring 16 Onyx preamps (plenty for most live acts), sound quality was exceptional at volumes across the board. At first, we were a bit wary of how well the iPad would integrate with the mixer, but once we fired up the Master Fader app and paired the units, usability was seamless and thankfully incredibly easy. In short, it just works. Whew!

The big selling point of the DL1608, though, is its wireless mixing capabilities. We ran a number of tests, including one where (with even a weak WiFi signal), we were able to mix a 4-piece band using the iPad clipped to one of the group’s mic stands. They performed several songs and were able to, on-the-fly, control the mixer through the iPad’s touch interface. Our top recommendation for your iPad arsenal. 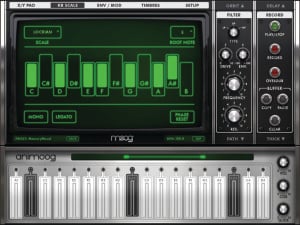 “Animoog, powered by Moog’s new Anisotropic Synth Engine (ASE), is the first professional polyphonic synthesizer designed for the iPad. ASE allows you to dynamically move through an X/Y space of unique timbres to create a constantly evolving and expressive soundscape.

Animoog captures the vast sonic vocabulary of Moog synthesizers and applies it to the modern touch surface paradigm, enabling you to quickly sculpt incredibly fluid and dynamic sounds that live, breathe, and evolve as you play them.”

If you’re gonna have a synth in your pocket, why not go to the folks who know synths best? We’ve tested out other synthesizers on the iPad, and generally speaking, they were terrible. Sound quality and programmability was lacking, and the controls could hardly be described as intuitive. Animoog changes all that, and delivers pure Moog feeling at under 30 bucks. We’re also impressed at the MIDI capabilities of Animoog, essentially turning it into a control surface for your plug-ins or external hardware. Cool, huh? “StudioLive Remote for iPad, available free from the Apple App Store, provides direct wireless control over the PreSonus Virtual StudioLive software for Mac and Windows, which in turn controls any StudioLive-series digital mixer. As long as you have a wireless connection between your iPad and computer, you are in control of the console.

The Overview displays the parameters for multiple channels at once. Tap for a close-up view of Fat Channel processing, and navigate between the gate, compressor, EQ, and so on with the flick of a fingertip. The Aux view shows the levels, panning, and Fat Channel processing for the Aux sends and internal FX buses, while the GEQ view lets you adjust the graphic EQ. Hold the iPad in Portrait position to see every parameter for a single channel. SL Remote can control any StudioLive mixer on the wireless network, and multiple iPads can control the same StudioLive.”

We’ll keep this short – what’s not to dig? First of all, it’s FREE, so you’ve got us hooked right there. And second, we’re big fans of StudioLive anyway, so anything that’s going to allow us to enhance our SL experience gets a big check mark in the PRO column. The remote itself is easy to use, and we love the fact that SL can be controlled from multiple iPads. PreSonus fans, you owe it to yourselves to download this one right now. “A magazine app for the iPad, Blue Stage offers you all colors of sound wrapped in one arrestingly new interface design. From out-of-studio recording to capturing the sound of supercars, from the changing face of DJ culture to the constant appeal of musical icons such as P!NK – we unfold the fascinating world of sound for you for free! It’s not about the looks, it’s about the songs – the emerging bands issue tackles the tricks of the trade for upcoming musicians. Learn from the experience of Canadian top act Simple Plan, and hear how budding talent from China or Switzerland are making a name for themselves already in their teens.”

For starters, they’ve clearly invested a lot of time and money making Blue Stage right. This isn’t some Joe Shmoe blogger putting together some lame-o app. Look, the bottom line is this – it’s free, it covers tons of great topics for recording enthusiasts, it’s easy to navigate and best of all, it focuses on our core audience: the DIY artist. So fire up that tablet, go to the app store and start reading – you might just learn something today that you can apply to the studio tonight.