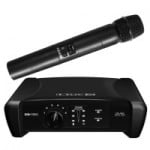 Once thought of as a luxury ticket item only available and affordable by major artists – a high-quality, clear, dependable wireless rig is now more accessible than ever. Popular among DJs, MCs, pop artists, houses of worship and with energetic performers for obvious reasons, wireless microphone systems have clearly apparent benefits with some not so apparent trade-offs. In addition to the standard set of metrics used for determining a live microphone’s quality (feedback rating, frequency response, etc) battery life, interference rejection, and number of channels are just a few things to consider when making the switch to wireless. With a wide variety of feature sets, and prices ranging anywhere from $150 -$2,000, we took a look at five reasonably priced, well-received mics that make for an excellent entry point. Most think of Line 6 as the company responsible for the POD and other guitar effects units, however Line 6 has jumped on the fast moving pro-sumer audio train with a handful quality recording and live audio products. Their XD series of wireless microphones is no exception. While it’s the least expensive mic reviewed, and also features far fewer channels than its competitors, the unit is absurdly simple to use (just one knob) and even features an Environment Filter to prevent feedback while providing a clean, reliable connection.

If the number of available channels is a big differentiator, then look no further. With 1440 possible channels, Sennheiser’s offering beats the competition by more than 300! The EW 115 is also one of the two mics covered that has a rechargeable battery pack, meaning you won’t have to worry about not having an extra pack of Double As handy at your next gig. The unit features an integrated EQ to adapt to your environment, and the mic has interchangeable capsules should you want different polar patterns.

Audio-Technica’s ATW series is an affordable, yet remarkably high quality line of wireless microphones. While this model only goes down to 100Hz, and the unit features far fewer channels than the Sennheiser, it’s impressive that they were able to fit a rechargeable battery pack into it at all. The specs indicate that the operating range of the mic is 300 feet, 200 feet more than the Line 6.

EV, made wildly popular in the ’60s and ’70s for their workhorse dynamic microphones, offers a beast of a wireless rig with over 1000 channels. The 410 handheld mic has interchangeable capsules and features a one-touch mute button, eliminating the need to turn the unit off for silence. EV has added Digital Posi-Phase True Diversity to this model to ensure a clear, reliable signal. If this mic holds up like any of their iconic wired microphones, then rest assured it will come through gig after gig.

Chances are, if you’ve ever been behind a microphone on stage, you’ve been behind a Shure SM58. The 58 is considered by most to be the gold standard by which all live vocal microphones are judged. Famous for its high SPL rating, fantastic feedback rejection, and being built like a tank, the 58 is not only inexpensive, but will last a lifetime and sound as it did the day it was purchased (even after being dropped, spit on, hit with drumsticks, etc). The SLX Beta58 is Shure’s attempt to take the 58, improve the specs, and make it wireless. With nearly 1000 channels, interchangeable cartridges, and audio reference companding isolation, the SLX is an excellent option for those demanding superior reliability, longevity, and quality.

While there is undoubtedly a wireless microphone on the market that fits your needs, investing in your own microphone to use live, especially a wireless, is a decision that should be well thought out. If you’re going to be holding the microphone in your hand, go to your local music store and actually hold the microphone in your hand. Are there buttons that get in the way? Is it heavy? Does it feel natural to hold? If the mic will be used for DJing, or on a podium of sorts, what is the largest venue you anticipate performing in? What is the microphones distance rating? Are there enough channels or frequency bands to combat potential interference? These are just a few questions you should ask yourself when considering making the move to wireless.