The new iRig HD 2 Guitar Interface from IK Multimedia is the perfect complement for any guitarist’s smartphone or tablet.

Great price, AmpliTube app is fantastic, can be used with smartphone/tablet or computer.

Cable clip is kind of flimsy.

There are a few ways to use this neat little device. Connect the iRig to a smartphone/tablet, plug in headphones, plug in a guitar, and open up the AmpliTube app. Band- you’ve got a great rig simulation for practice, rehearsals or personal playing. It also works well with GarageBand and other similar apps. There is a switch on the side marked Thru FX, and by connecting the iRig HD 2 to a guitar amp, or PA, all those great AmpliTube tones can now get routed to the amp. Switching the Thru FX switch to the other position, it can now be used as an inline tuner. 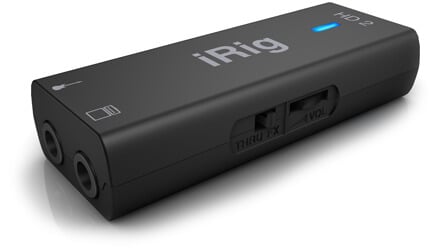 Connect the iRig HD 2 to a computer, and now it’s a USB guitar interface for pretty much any DAW you’re running. With digital to analog conversion at 24bit, sound quality is excellent across the board. There’s even a free update that brings the sample rate from 48kHz to 96kHz.

The AmpliTube app must be singled out, with all of its amazing emulations of great amps, cabinets, stompboxes and effects that are super easy to set up, tweak and save. This isn’t just for guitar players either, there are killer bass rigs that can be easily honed, as well.

As a personal practice/playing device, it’s great to work out parts using the recording function on the AmpliTube app, and be able to take all those sounds crafted there and use them live. The only downside is that there is a small plastic clip that snaps into the casing, that’s meant to be velcroed to a guitar cable. It’s a neat idea, but feels flimsy, and if the Velcro gets loose, it slides down the cable. A design that could clip on a guitar strap would be better. Overall for a street price under $100, it’s a great little tool (it’s about half the width of an iPhone) that is perfectly suited for personal practice, can be used live with an amp, or as a recording interface to lay down your parts. It’s a “win, win, win” situation!