Orb Recording Studios is a 5,600-square-foot facility built from the ground up on an acre of Texas hill country just 25 minutes from downtown Austin. The studio is the vision of co-owners C.B. Hudson (lead guitarist for Blue October) and Matt Noveskey (bassist for Blue October) who sought to merge the quality of renowned East and West Coast studios with the pretense-free vibe of Austin. They have created a studio that will not only accommodate major acts from around the country, but also nurture new artists.

THE INITIAL PLAN AND BUILD

CB and Matt approached me, as a studio designer, with a good list of initial concepts and goals they had for the studios. Among these were the need for a state of the art “A” room, and a smaller and somewhat scaled down “B” room. The had a very specific business plan for booking these two rooms, and even wanted space in the overall building for a future “C” room. They wanted a building that blended with the beautiful Texas Hill Country and was still economical to build but provided plenty of space as client comfort. To that end, I chose a metal frame basic structure, but with a complete stone and stucco exterior. The height was important too, so we could have great sounding rooms, all fully floated. The overall structure is about 25′ high, and interior rooms are as tall as 22′.

Our planning continued in a “round-robin” manner, with me starting to draw conceptual renderings, CB and Matt reviewing and responding, and then making adjustments in the floor plan or feature set. And while the building plan was taking shape, we were also discussing equipment and workflow. We brought in our integration specialist early on, so he could start his planning and ballpark pricing.

Choices for finishes, acoustic treatments and the overall aesthetics were also discussed from Day 1. Many things changed over the course of this planning, and slowly we brought all these elements together and the design began to gel.

We needed the highest level of sound isolation, with the building close to the road and close to a residential area. The exterior was going to be beefy, with stone all around, and the “natural” air space provided by hallways to help isolate interior rooms. But every room in the entire facility is fully de-coupled, and we used an engineered approach, with products and materials from Mason Industries. All doors are massive and manufactured “studio” doors, and all interior windows are extremely dense, double glass with large air spaces separating the panes. 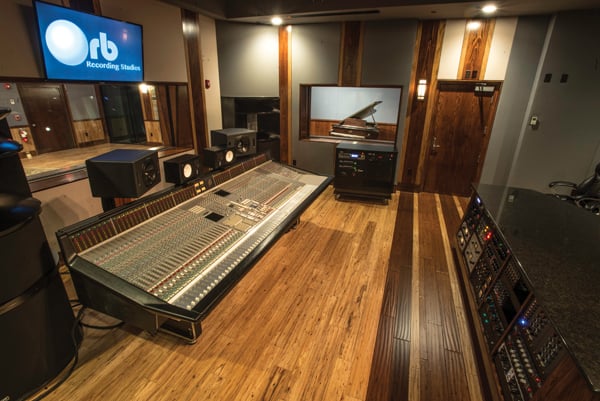 The choices on the major equipment items are important, and can shape the client’s perception of the studio. Matt and CB were committed to an SSL “G” series early on, and I will admit to trying to dissuade them, considering possible maintenance issues with a 20-year-old console. But their reasoning for this choice – that most of their very favorite records and producers used SSL boards – impressed me, and a refurbished SSL G+ became the centerpiece of the “A” room.

To finalize the choices for speakers, we went out to Los Angeles and auditioned several of the very best big monitors. To my surprise, the guys absolutely fell in love with Allen Side’s OceanWay HR2s. These are free standing monitors, very “hi-fi” but will rock hard as well. With this decision made, now my design for the control room changed radically, not needing the large soffits for a typical in-wall monitor system.

Originally we had an echo chamber behind the control room. But the desire to have a HUGE control room led to eliminating the echo chamber, and extending the control room another 6 feet in length. This turned out to be a great decision, as the finished “A” control room is over 9,100 cubic feet, and able to easily fit the entire band in any recording session. A long narrow hallway that serves as one of the entrances to the large tracking room now became a default “echo room,” and putting a mic panel and wiring into that hallway made it easy to use for that purpose.

Even before a final set of plans was produced, we started “value engineering,” which really means looking at the choices and specs for every line item, and seeing if there’s a more cost effective way to achieve the same end-goal. The final and finished look of every room did not suffer, and we feel that Orb is the most attractive and comfortable studio in the area.

THE “NUTS AND BOLTS” OF ORB STUDIOS

The exterior building is a metal frame, 25′ high and about 5,500 square feet. We applied a stone and stucco exterior. Inside, there are 9 “studio spaces” of varying sizes, from the large “A” tracking and control room, a medium sized “B” suite, and several isolation booths. Every one of those studio spaces is fully de-coupled from the building itself, built on engineered isolators, and made up of a double wall system, and a floor and ceiling which form the shell of each room, creating a very high sound isolation detail. There is space for a future “C” suite, and a huge lounge and kitchen, restrooms, equipment library, and offices.

The studio rooms all have extensive “bass trapping” formed by varying thicknesses and geometries of absorbing and diffusing materials. The finishes are stretch fabric and a variety of different woods. All the acoustic finishes are custom designed and built, with the exception of RPG Wave Gaussian panels hung from ceilings, and Acoustic Geometry “Curve” poly, phase coherent diffusers.

All doors are heavy-duty sound isolation supplied by ASI ProAudio. All interior studio windows are custom built, utilizing 3/4″ and 1/2″ thick glass, with large air space between the two panes.

Recording equipment includes the usual complement of fully-loaded Pro Tools, a great mic list, a great outboard list, an SSL G+ 48 input and ATR 2-track for mixing. Ocean Way HR2s are the main monitors in “A” and several alternate speakers are available. The “B” control room features a custom designed “Amp Wall” with a selection of the best guitar amplifiers wired to a switching system that enables guitarists to easily try out any combination of amp heads and speaker cabinets, all from the control room.

EVERY room in the building, even restrooms, are interconnected with audio, video, network and digital lines. The SSL patch bay was re-worked for more efficient workflow with Pro Tools; anything can be patched anywhere.

The construction process was lengthy, starting with a hilly and rocky site that needed extensive excavation. But the results are a state-of-the-art studio that has already attracted artists like Justin Bieber, Lil Wayne, Erykah Badu & The Cannabinoids, Bizzy Crook and Blue October since the studio’s official grand opening on March 16th. We are expecting a great year ahead.

A veteran studio architectural and acoustics designer with a background in both engineering and music, Genfan has created many of Texas’ most renowned recording and production spaces, including Tequila Mockingbird and Robert Rodriguez’s Troublemaker Studios’ audio facilities. For more, visit www.orbrecordingstudios.com.