What’s Behind The Resurgence of Analog Synthesizers?

WHAT IS SO GREAT ABOUT ANALOG SYNTHESIZERS?

As a vintage and analog synthesizer demonstrator, I get this question a lot.

“What has analog got over the great software and digital hardware synths of today?”  That’s usually the next question, and to answer either of them, we have to examine the 25-odd-year history of the analog revival, its causes, and the generational changes that have occurred in it.

First, what is special about vintage analog synthesizers is that the electronic design of early modern synthesizers led to “flaws” like drifting tuning, distortion, noise, and subtle variations in waveshape generation, frequency, and amplitude.

Now, you might say, “Those are all bad things,” (just like musicians in the ’60s and ’70s did, and consumers today do) but in the right amounts, these “flaws” are the core of the attraction to analog synthesizers.  Variations of waveform shape, frequency, and amplitude along with distortion and noise lead to a natural harmonic complexity that is common in acoustic sounds.  These acoustic aspects make the vintage synthesizer’s sound pleasing to human ears.  The somewhat-primitive electronics coupled with inventors with musical ears led to synthesizers that not only allowed you to author sound, but allowed you to author aurally-pleasing sound. Another natural attraction to early synthesizers is the interface.  By presenting all functions as accessible at all times through physical interaction, this abstract synthesis concept was made visually-accessible and physically-interactive, which are important aspects of real-time expression. But again, what early synthesizers presented in regard to interactivity and expression came at the cost of complexity, maintenance, and… well, cost.  Consumers were frustrated by the inconveniences and challenges created by the aspects described above, and demanded that the synthesizer industry pursue more stable, more powerful, and less expensive options.

Luckily, this came during the rise of effective and economic digital technology.  Digital synthesizers were created that erased all of the “flaws” that were challenging to analog synth users, and gave the users much greater control and power.  Complex forms of synthesis, digital precision, and expanded polyphony, for example.

But this transition wasn’t without sacrifice.  While digital synthesizer tuning was reliable and precise, the lack of waveform variation led to strangely sterile and “cold” sounds.  Simply put: the precision and power came at the expense of beauty of tone.

In order to control the functions of these new, complex digital synthesizers, new interfaces were required.  These interfaces had to give access to the expanded functionality, and also needed to be economical to allow prices to be low.  The results were small digital screens, a few controls on the front panel, and a very great deal of textual menu-diving…  menus nested in menus through a tiny visual interface.  Full real-time control became a thing of the past, and presets became the standard.

WERE THE SACRIFICES WORTH THE BENEFITS?

The cries of “too cold, too sterile” increased, and Generation X found a solution in the early ’90s. They remembered the synth sounds of their past, and started purchasing second-hand synthesizers from the ’60s and ’70s.  By then, they were very inexpensive…being “obsolete,” and all.
A groundswell of analog interest expanded over the ’90s, and resulted in greater scarcity of vintage instruments, and higher prices.  Established synthesizer companies were reticent to jump into this mania due to their distrust of its longevity.

By the early 2000s, vintage synthesizers that were nearly free in the late 1980s were worth in the thousands of dollars.  Musicians and recording artists increasingly used vintage analog synthesizers in performance and recording, and doing so became associated with status. [RELATED: 3 Tips For Getting Great Sounds From Your Analog Synth]

Modern consumers require pitch stability, the absence of unintended distortion and noise, and robotic accuracy.  Synthesizer companies know this, and make their modern analog devices very stable, clean, and precise.  This is great for reliability and accuracy, but means that modern analog synths are less likely to sound like vintage synthesizers.  And, due to the fact that digital synths and software have made such great progress in emulating analog behavior, it means that digital/software synthesizers have simulated more of the variability of analog than they did.

BUT WHAT ABOUT THE GREAT ANALOG SYNTH TONE OF THE PAST?

In 2012, something unbelievable happened.  Korg, one of the largest synthesizer companies in the world, decided to actually remake an analog synthesizer from their past…the Korg MS-20.  They made a faithful reproduction and allowed the synth to retain its vintage analog character… warts and all.  Vintage analog had returned.  They then recreated the ARP Odyssey, a synthesizer created by the long-defunct ARP Instruments… and again, made a faithful vintage-sounding reproduction. 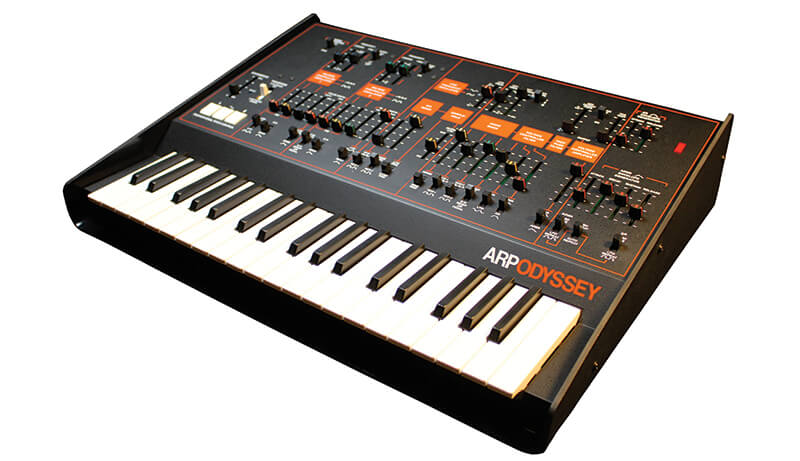 Other companies followed suit, like Moog’s recreation of the previous Moog Music’s 1974 modular, and Tom Oberheim’s recreation of his SEMs and Two Voice systems from the 1970s.

A 25-year history of embracing the past as well as improving for the future has made the “What is so great about analog” question a challenging one to answer.  But I suppose I would say that the great thing about analog is that it inspires the user to expressively interact with the self-contained interface while generating great-sounding timbres that also have a pleasing tone.   Everyone from nostalgia-loving Gen X users like myself, to young people seeking great timbres for modern music, can find inspiration in the great tones and inspiring interfaces of most vintage AND modern analog synthesizers.

1.  Korg’s analog synth reproductions:  While Korg has a number of modern analog synthesizers, their vintage reproductions look and feel like the original synths (even if they are slightly smaller!)

2.  Check out the synthesizers created by British boutique designer Analogue Solutions.  They feature all of the benefits of modern implementation with analog components and vintage tone.

3.  At first glance, they may not SEEM inexpensive, but when you think about it… 6-voice polyphonic synthesizers feature 12 analog oscillators, 6 analog filters, and a host of other functions.  Keeping that in mind, I highly recommend looking into the Dave Smith polyphonics, the Prophet 6 and the OB-6.  They are extremely powerful, and yet, generate deliciously authentic analog tone.

Marc Doty is the composer and synthesist responsible for the weirdly-popular (over 7.4 million views) analog and vintage synthesizer demonstration YouTube channel “Automatic Gainsay.”  Marc is also a synthesis historian, a public speaker at synthesizer industry conventions, and the Archive and Education Specialist at the Bob Moog Foundation.

What do you think of this special guest article about the analog synth revival? Let us know in the comments below or drop a line on the Performer Magazine Facebook page or on Twitter @Performermag. And read more from the special Synth Issue of Performer Magazine.