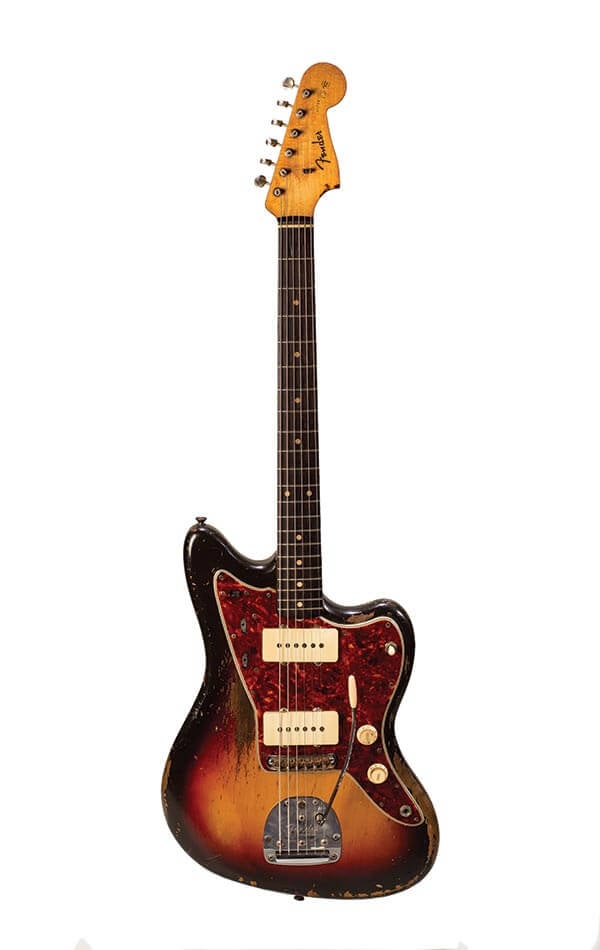 BACKGROUND
My friend Rudy from Rudy’s Guitar Shop (NYC) handed me this instrument and I immediately played things I’ve never heard come from my fingers. When I asked him the history he proceeded to produce documentation and photos of Jimi Hendrix, pre-fame, in the Isley Brothers and also a shot of him in full “Hendrix” mode from 1968, playing THIS guitar.

WHAT IT SOUNDS LIKE
A piece of history. I’ve tried to research if there are any Jimi recordings but could find none. However, listen to anything from surf music to Sonic Youth and it is prominently featured. One of my all time faves, Elvis Costello, is also a big Jazzmaster user.

INTERESTING FEATURES
The pickup circuit features the roller thumbwheel and switch, which selects between two different pickup circuits, or the “lead” and “rhythm,” giving the player added flexibility to color a performance live. I have barely cleaned the guitar, figuring any of Jimi’s DNA can only enhance the playing of the instrument! Rumor is the case is not original and that Jimi didn’t actually have one, carrying the axe around unprotected!

OTHER NOTES
Museums and collectors have asked to pay a king’s ransom for this guitar but I don’t want to see it on a wall. It deserves to be played as often as possible – and I do. Listen to any post-2012 recording I’ve done and this guitar is on there somewhere (most notably the new miggs single “Ordinary”- which is lodged in the Top 40 on Billboard Mainstream Rock Charts!). Come to my studio and I’ll let you hold it.