For Sharon Van Etten, life on the road extends beyond cramped tour accommodations and small clubs. Her story reflects years of traveling away and back from home, a singer whose vagabond spirit has been buffeted by caring and cruel winds alike. The arc begins as a high school graduate leaves home in New Jersey for Tennessee, trading college for coffee shop work and stability for a damaging relationship. Abruptly cutting out with a midnight escape, Van Etten returns to the East Coast. She rests in rotating comfort on friends’ couches all over New York City. And then with supportive allies, Kyp Malone and Aaron Dessner among many, Van Etten channels her pained wanderlust into 2012’s Tramp. Yet, even with critical appreciation for the album and the call of the road sounds an ever-present echo throughout her most recent record, Are We There.

Just as Tramp evokes a wandering protagonist in its title, the new album asks if the journey has reached a conclusion. The cover uses a photograph taken by Van Etten of a woman leaning her head into the rushing wind, hands on the steering wheel. Her current publicity photograph shows Van Etten staring forward from the passenger seat of a car. There is a constant motion to Van Etten’s music, and life. As she embarks on a European tour in support of Are We There, we asked Van Etten about these themes of traveling and how she finds rest.

Here is what she had to say…

The drives get a little crazy. I’m a little tired after driving, and load in, and soundcheck. Not usually in the mood to eat before a show. I love to read when I can, but I am easily distracted. I find the sound of the road really calming, actually. I like to close my eyes and press my face to the window. Most days off are spent driving. The band is really great though, so we all have a good hang even when things get boring. Our shows are the highlight of the touring. The light at the end of the tunnel…

I’m a great driver, but I’m a granny driver. I go the speed limit and use my blinker way too much. I can’t drive stick shift and I have never driven on the left hand side of the road. It makes me nervous. And the only time I tried driving a manual, I flooded a car engine and my friend had to pick me up from the Laundromat. I’m such a loser. Ha! We always go over the set list as a band. Just before the show, we write the list together and talk about how the transitions worked the night before. What songs we’d want to swap out that we haven’t played much yet.  This is a new lineup and we just started touring, so we are still getting in a routine.  When somebody from the audience shouts out a song, and I feel like I can play it well and do it justice, I will sneak it in at some point when it feels right.

We love to connect with friends and family whenever we can on the road. My parents even flew to meet me for my birthday in Berlin when I turned 30. It’s important to stay grounded and connected when you feel so detached. It’s weird staying in hotels almost every night. When the opportunity arises, I prefer to stay at a friend’s house – but only when I know I can sleep in, ’cause I tend to hang out late and talk until morning, wanting to catch up.

So far, I still feel very connected to my audience. I encourage people to talk and laugh. No need to be polite and quiet. I enjoy an interaction; I like having a conversation, it is important to me.

My friend Thor once said, “Don’t evaluate your whole life while you’re sitting in a janitor closet waiting to go on. You think you’re above having shitty days at work? Shut up and do your goddamn job.” Also, I asked Nick Cave how hard it was to tour and work and be away from his wife, if they ever fight when things get hard. He said, “Oh sure, we fight all the time. But never about work. Never about my work.” That changed my life.

Just stuff I’d have at home: a nice French red wine, some bread, cheese, fruit, water, and WiFi to catch up with my friends and family and the outside world. 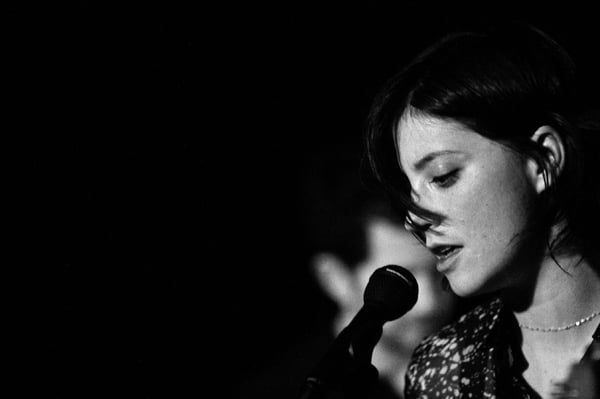 As far as lyrics, I don’t think there are any double meanings. No one has told me, at least. But as far as miscommunication during a performance, I found out the hard way that sarcasm and irony don’t always translate. I performed at Primavera in Barcelona in 2012 and it was such a perfect day – blue skies, beautiful beach, sweet people, and lots of great food and music. During the performance I said something along the lines of, “Isn’t this just the ugliest place on earth?!” And I got booed. And even during some interviews recently in Spain, I was asked why I wanted to play Primavera again even though I thought it was ugly. It was a joke, guys! It was just a joke. Apparently a bad one…

I just moved to Manhattan in November, so the city is much more chaotic and it helps me want to stay home and enjoy being an introvert. And if I am only home for a week or two in-between tours then I prefer to sleep and eat and not really go out or see anyone. I am pretty exhausted and not caught up on sleep and need to get my energy back up to get back on the road. I feel pretty emotional when I get back from being gone so long; I don’t know what to do with myself. I write all the time and read my journals to reflect on everything’s that happened throughout the passing months. It’s hard to catch up, though…