Screaming Females Recount the Road to “Live at the Hideout”

On their way to recording Live at the Hideout, Screaming Females lost control of their van. As they slid backwards down the frozen Interstate, they locked eyes with another driver, headed their way. In a blink, a semi-truck smashed into her minivan. Luckily, everyone survived, and the band made it to Chicago with a sense of urgency that dominated bedroom-sized venue, The Hideout, for two nights of sold-out shows.

For Live at the Hideout, the band enlisted legendary engineer Steve Albini, who spent those two nights in a “Metro Mobile” truck, a control room on wheels, parked in a snow-covered alley, behind The Hideout.

This album is not simply raucous-sounding versions of old songs; it is an illustration of how 900+ live shows, and the roads in-between, can morph songs into something entirely new. Whether it’s a 7-minute improvisation of “Lights Out” (typically a 4-minute track) or a freak-out during “Boyfriend”—like roaring frontwoman, Marissa Paternoster, crowd surfing with blood running down her chin—the evolution of sound is evident. Nine years in the making, Live at The Hideout captures something immediate and asserts Screaming Females as one of the best live bands of our time. 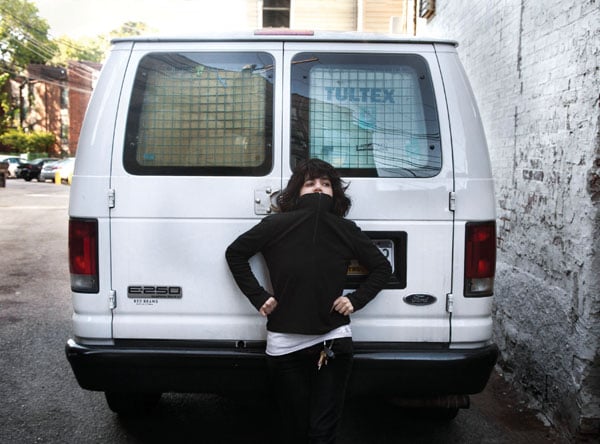 Steve Albini had the following to say about working with the band on this new LP: “What attracted me to punk rock when it first exploded was that it was unpredictable and that no two bands had very much in common. Each band committed itself to a unique set of ideas, and it didn’t matter what other bands were doing or what the audience might expect. Screaming Females are that same kind of wide-open punk rock, from before it condensed into a style and every band had to be taken on its own terms. They are a great band and I hope they keep going forever.”

Here’s what bandleader Marissa Paternoster recalls about the ordeal…

I did the math.

Over the course of roughly nine years as a touring band, Screaming Females have played an average of 85 shows per year.  We drive an average of six hours per day, which means we spend about 510 hours a year in the van.

So we’ve spent roughly 4,590 hours together, driving.  We’ve barreled down freeways, navigated the circuitous passages of old city streets, cruised over bridges, sat in gridlocked tunnels, and parked on slow-moving ferries.  Every second of every minute of all of those precious hours has provided us with ample opportunity to get in a car accident.

Miraculously, we’ve never been in a serious collision.  We’ve come awfully close.  One time a semi almost sandwiched us up against a highway median in North Dakota.  In Norway, we nearly crashed head-on with two separate tractor-trailers while attempting to slip through an ice-caked one-lane tunnel.

I was responsible for many of our fender benders (some might say it’s my forte) but I’ve never been behind the wheel during the serious scrapes.  I was in the backseat with my eyes closed during the aforementioned incidents, as I am an avid and committed napper. I have experienced the adrenaline rush of a near miss, but I’ve never actually laid eyes on an oncoming and/or threatening vehicle.

The story is as such: we left a friend of a friend’s house in Kalamazoo on January 29th. We’d stayed at a nice enough place, but the couch I chose to sleep on was really springy, and left me awfully sore.  Our hosts woke up at 10 and made us breakfast.  I’m guessing we left their place around noon.

Before we got on the road, we stopped for more coffee, and I jumped into the passenger seat.   Mike was driving, and highway conditions were nothing short of shit.  Our hosts had told us that a lot of Michigan state funds were tied up in some sort of bureaucratic nonsense, and cities were unable to pave or salt the roads properly.

It was obscenely cold outside, and it looked as though at least three feet of snow had accumulated and frozen solid in Kalamazoo since the beginning of winter.  The sun was shining, however, and it made the day a bit less dreary.  We were driving at a sensible speed, very carefully, when suddenly I felt the van slip off the road.  It was a peculiar sensation, as if a giant hand had reached down from the cosmos and lifted us up into the atmosphere.

We were rapidly swerving towards the median, and while I sat silently panicking, Jarrett yelled from the backseat, “Pump the brakes and turn into the spin!”  Mike did, and eventually the van shot towards the right until we had spun a full 180 degrees and were facing oncoming traffic in the bright mid-morning sunlight on an icy Michigan freeway.

At this point I was sure we’d either flip over or collide with another vehicle, but we were still in motion.  All I could hear was the deafening silence of my three friends holding their breath, and our gear clanging against the bare metal walls of the trunk.  Right before our van made its third and final spin, we managed to lock eyes with a woman behind the wheel of a minivan that was catapulting straight toward us.  I saw her arms yank the steering wheel sharply to the right, and with that, she shot out of sight as we slid into a very forgiving snow bank.

There was a brief moment of silence before I realized that I hadn’t been breathing.  It’s true what they say: accidents of such a potentially severe nature really do play out in slow motion.  I reached out to touch Mike’s shoulder and his eyes grew puffy, red, and watery.  Joe, who runs our record label and had been nice enough to roadie for us, asked if everyone was all right. Yes, everyone was fine.  How about our van?  Yes, the van was fine, too.  The minivan that had almost hit us had crashed into the snow bank some 50 feet ahead. The driver’s side was smashed in, but the damage wasn’t as bad as I had feared.  An intrepid roadside vigilante named John had pulled over to the shoulder and was inside the vehicle, holding the woman’s head in place.

She looked like she was in shock, and I think it’s safe to assume she had hit her head.  I imagine John was holding her head as a precaution in case she had acquired a serious injury.  Joe and I walked up to the car, asked if everything was all right, and made sure an ambulance was on its way.

Once the police, ambulance, and firemen all arrived and took our information, we were let go.  “Thanks for stopping” said the policewoman, which I found to be a rather odd remark, considering I would have given my left arm to stop the goddamn van as it spun out of control on the frozen interstate.  Jarrett got in the driver’s seat, and we took off to play a show in Milwaukee with our labelmates Tenement.

When we sat down to dinner that evening at the Comet Cafe, I said to Jarrett, “I wonder if that woman is okay.”

“I’m sure she’s fine,” he said.  I still wonder, though.  Sure, scarier things have happened to me in my 27 years, and while I’m not inclined to list them all, this particular incident could easily land in my top 10.  While locking eyes with that woman from behind the salt-caked windshield of our van, I’d wondered, “Will this stranger be the last person I see before I die?”