We are psyched to premiere the new Kansas Bible Company song, “Backyards.” The track is a must-listen for fans of Iron & Wine, Elliott Smith, and Nuetral Milk Hotel. Read more about the band after the jump, and let us know what you think in the comments.

Kansas Bible Company will make you a believer. A believer in the power of psychedelic rock. A believer in the soulful punch of a three-piece horn section. A believer in music—in this case, music made by seven bandmates and three songwriters, all of whom attended the same Indiana college before moving their operations to Nashville.

With their third album, Paper Moon, the band tightens its approach, adding pop hooks and sharply focused songwriting to a sound that was once wildly experimental. Kansas Bible Company haven’t lost the unpredictable edge that pushed albums like Hotel Chicamauga into Frank Zappa territory, but Paper Moon shines a light on the melodic core that occupies the center of their music. 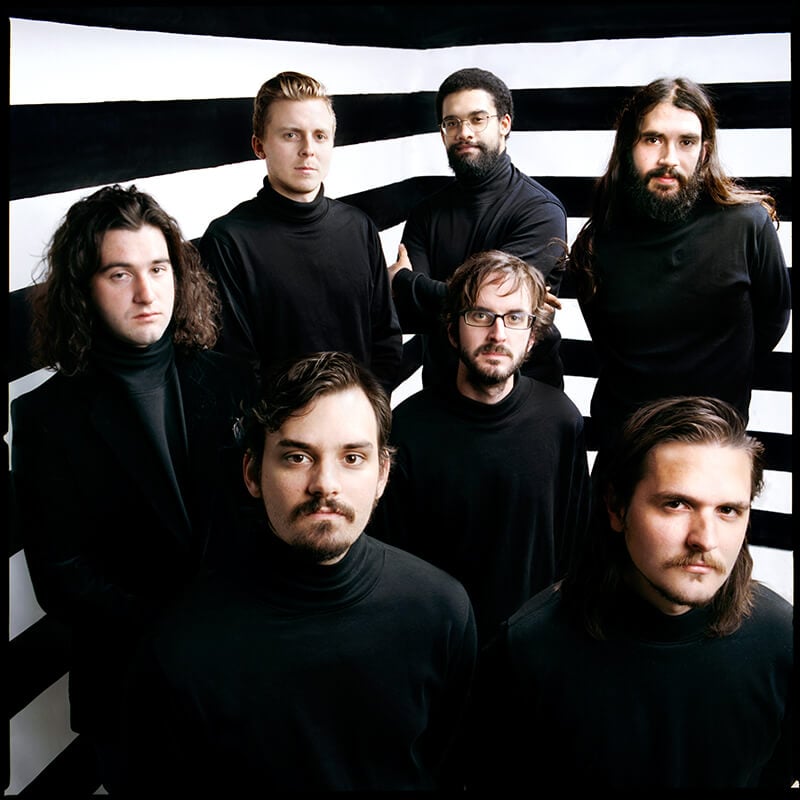 “We were listening to pop music by bands like The Beatles and Wilco,” says bassist Nathan Morrow. “We wanted to focus on good pop writing, then make those songs a little bit weird and interesting by adding different textures. Whereas before, we’d start with the textures and then figure out the song, we decided to do the opposite here. We wanted to make sure we could play the song on an acoustic guitar first.”

Recorded and produced by Skylar Wilson (Justin Townes Earle, Andrew Combs) during the band’s fourth year in Nashville, Paper Moon finds Kansas Bible Company dealing with a rapidly growing hometown and a revised band lineup. It’s an album about change — about looking back on the past; taking stock of the present and making decisions that will affect your future. The group’s three songwriters all approach those themes from different angles, resulting in an album that remains focused while still covering a wide range of ground.

“It deals with a changing landscape,” says trumpet player Charlie Frederick. “We had 11 guys in the band when we came to Nashville, and we all of us moved into the same house. Over the process of writing Paper Moon, some people left the band. I think changes like that are happening not only with our band, but with our audience and our city.”

Paper Moon captures a band on the move. Kansas Bible Company are growing up, retaining the spirit and swagger of their partying days while adding sharper hooks to songs like “Adios Amigo” and “Back in the Day.”

“We wrote songs about growing older,” adds Morrow. “This album is us becoming more than just a party all the time. It delves deeper.”