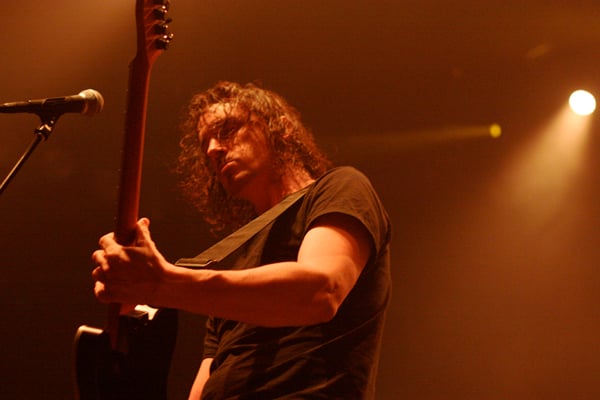 November 30. A dark, hot arena in Lowell, Massachusetts. A paraplegic man strapped into his wheelchair floats over the audience, dozens of hands holding him safely aloft while his own hands form fists and punch rhythmically at the sky.

Gojira frontman Joe Duplantier watches with a smile on his face, furiously picking away at his guitar. When the song ends, he praises the enthusiastic masses, commenting on a lackluster NYC audience a few nights prior. It’s hard to imagine how any crowd could resist the powerful stomp of this French monster.

But make no mistake; Joe claims Gojira is not a “French” band. “In France,” he explains during an interview in Vermont a few days before, “the vibe of the country is very far apart from metal, so we cannot really go, ‘Yeah, we’re French!'” He laughs, mimicking an angry-faced musician playing a guitar slung low.

Though all business on stage, the amiable frontman exudes an infectious sense of calm while discussing his band, their connections to France and to the world.

“Mario—my brother—and myself, we have an American mother. She was born in Madison, Wisconsin, and she grew up in the States. She traveled to France, met my dad, and stayed in France. Never came back to the [States]. So we had, also, this American education. I mean, even though I was born and raised in France I had more of something else, this education, so since I’m a kid, I’m like, ‘I’m not French, I’m a human being.’ So Gojira is more like a ‘human being’ band. An intellectual band.” The concept of French intellectualism becomes apparent with just a glance at the band’s lyrics. Standard heavy metal tropes and clichés are nowhere to be found. Gojira takes a more philosophical stance than their peers, choosing instead to cover such topics as the power of nature, personal spirituality, and respect for all life.

Even though Duplantier’s approach to writing lyrics may be culturally reflective, he says, “I never tried to sing in French. It was completely natural to sing in English. I guess I wanted to sound like Metallica and Sepultura. But more than that…when you want to deliver a message, you want to be understood by the world. The idea of communicating something to the world, it cannot be in French, really.”

Growing up in the small town of Bayonne in the southwest of the country, Joe (and his brother Mario, who has served as Gojira’s drummer since the group’s inception in 1996) discovered an early interest in art and music. “I learned piano a little bit when I was a kid,” Joe says. “I would never work on piano, really, but I would still take lessons and then not work during the week because I thought it was a little boring. But I grew up with the sound. The very first guitar I had was my mother’s guitar and it was just a piece of crap. It was an old classical guitar, all broken and beat up, with two strings on it. But I would spend hours on it, trying to make a sound. I thought guitar was really difficult until I grabbed a real guitar and I was like, ‘Whoaaa!’” But in those days, there was no heavy metal scene to speak of in France, and kids felt enormous pressure from society to pick a “respectable” career path early in life and stick with it until retirement or death. “In school and society,” Joe explains, “the outside world would be like, ‘No, this is not a job,’ but we were lucky to have very open-minded parents. When your parents back you up, it helps a lot. I mean, you see your kids playing and completely passionate about music…do your thing. And if one day you’re a bum in the street,” he adds, laughing, “that’s your problem!”

Duplantier’s parents, as well as those of guitarist Christian Andreu and bassist Jean-Michel Labadie, may have been on to something. Gojira’s latest album—2012’s L’Enfant Sauvage—is their first for the renowned Roadrunner Records label and their fifth overall. The album has seen them headlining multiple tours across Europe and the United States, and most recently, wrapping up a tour as special guests for Slayer, which ended its run at the Tsongas Center in Lowell. They are scheduled to play Australia’s Soundwave Festival in February, and are currently ironing out details for a possible tour of Japan in early 2014. The routine has been grueling, non-stop since the album’s release. This is the reality of a working band in the Internet era, when almost no one buys albums anymore.

“Life on the road is not easy,” Joe adds. “We get mentally and physically very, very tired. Right now, we are exhausted.”

And for a band like Gojira, there is little breath to be had from show to show. Between supporting slots with Slayer, they headline one-off gigs whenever possible, and to keep things exciting for themselves as well as the crowds, the band tries to change things up whenever they can.

“Mario is the one deciding the setlist, usually. You know, ‘This song after this song will boost the energy, then we need something to chill, and go back to something stronger.’ He’s really good at it.” But Duplantier is aware of the toll so many months on the road can take. “We have a lot of songs, of course, but there’s just a handful of songs we’re able to play in that state of fatigue. Don’t get me wrong; we put 100%, all our energy goes into each show, and it’s very important to us. It’s like a mission. But because we’re so tired, we can’t be like, ‘Oh, let’s play that old song that we haven’t played in years.’ The way we put the songs together, and how we interpret—how we play them—that’s what makes the concert unique.”

Judging by their performance in Lowell priming the audience for Slayer, or by their brutal headlining gig in Burlington, Vermont, one would never know this was a band past the edge of exhaustion.

“It’s kind of strange to go on the road for so long,” Joe continues. “We’re hungry for new songs. I wish I could be in two places at the same time, in the studio constantly, creating stuff, because that’s what I like the most.”

In the gap between the end of the Slayer tour and next year’s round of appearances, Gojira hopes to burn through some new material in the recording studio. In fact, they have begun writing already, on the tour bus, a phenomenon that Joe admits is rather new for them.

“I actually hate it. I mean, I love it when there’s an idea and it works and it sounds like there are things happening, but it’s really weird to sit in the middle of all these shoes—because everybody throws their shoes in the back lounge, and dirty socks—and a computer, and [Mario’s drum] pad…we’re not a rock band anymore, you know? It’s like being in a cage, a stinky cage with a computer. It’s not the same. I need to be in a room with my friends and jam, so I cannot wait to get to that stage.” 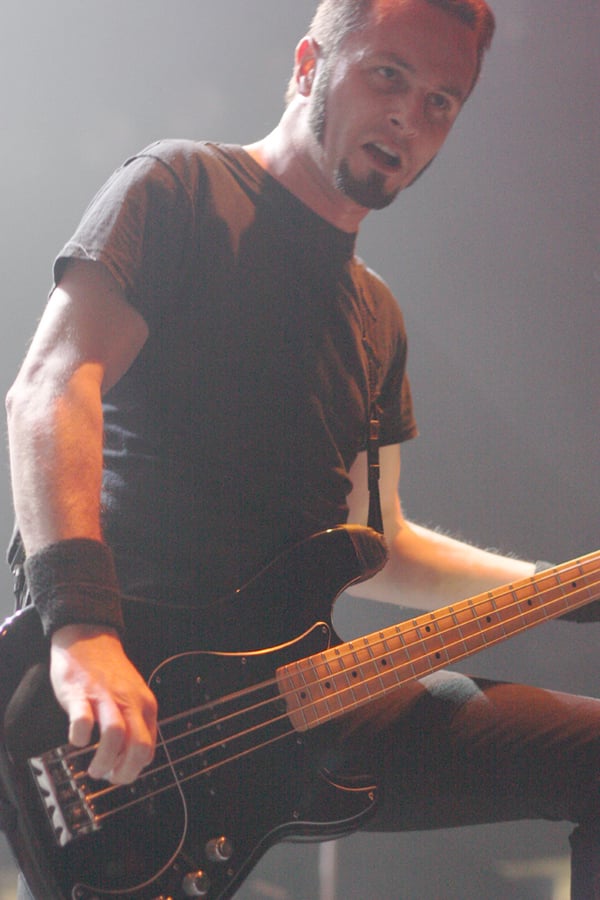 The conditions are far from ideal, working with GarageBand software and the limited amount of technology they can haul with them on the bus.

“It’s mostly riffs and ideas that we record,” he says. “We have a list of riffs, but we don’t have, really, a song. Well, we have two songs that [we think], Okay, there’s a structure here and there are enough ideas to make something. Some of the stuff is really exciting, but the conditions are really difficult, and when the bus is driving…”

Joe shakes his head, chuckling again. The exhaustion he spoke of earlier is still far from apparent. He appears comfortable and confident as he considers the next steps of the band. When confronted with the fact that Gojira is fast approaching its 20th anniversary, he remains as philosophical as ever.

“I don’t care,” he says, smiling. “I just try to be a better person, and my personal life is very important for me—my family—and trying to have a life that I actually enjoy. Of course [with] the band, yeah, it’s like, ‘Holy shit, it’s more than half of my life.’ My adult life is Gojira. Almost all of it. What we do, though, is we work hard making our group healthy, communicating, having good moments and being on the same page, all of us. With different personalities, sometimes it is not easy, but I feel we’re doing a pretty good job.”

(all photos by Matt Lambert)