The Minimoog Model D is Back in Production 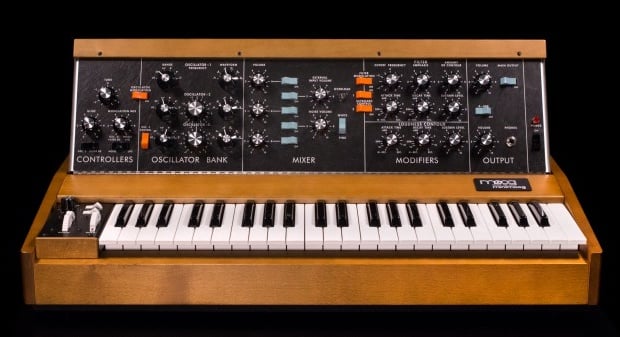 “Today we announce that after more than 30 years, production of the Minimoog Model D synthesizer has resumed. Introduced in 1970, the Minimoog Model D was the first portable synthesizer and served as the archetype for all electonic keyboards that followed. Conceived as a response to the large-scale modular synthesizers of the 1960’s, the Minimoog’s portability, accessibility, and expressiveness made it the go-to instrument for musicians looking to expand beyond the traditional sounds of the time.

Throughout history, the Minimoog Model D has been used by the most forward thinking artists to design the sound of the future. Bernie Worrell used the Minimoog to establish Parliament Funkadelic’s futuristic funk sound. Kraftwerk employed the Minimoog on the pioneering concept album Autobahn, sparking an entirely new genre. Gary Numan replaced his live band’s guitars with Minimoogs, creating the prototype for industrial music. The classic sound of the Minimoog Model D can be heard on Bob Marley’s Catch A Fire, Michael Jackson’s Thriller, Dr. Dre’s The Chronic and many more.

Each Minimoog Model D is lovingly handcrafted at our employee-owned factory in Asheville, NC. This legendary 3-oscillator monophonic instrument is securely housed in a hand-finished aluminum chassis and locally-sourced Appalachian hard-wood enclosure. To realize the unmistakable sound of the world’s first performance synthesizer, we preserve the component placement and through-hole design of the original analog circuit boards, employing military-spec precision resistors and custom-reissued transistors to complete the circuit.

Though no changes have been made to the original sound engine or audio signal path, the Minimoog Model D now includes a series of functional modifications to expand the instrument’s sonic capabilities beyond the factory specifications of a 1970’s production unit. These modifications include a premium Fatar keybed with velocity and after pressure available via top panel CV jacks, a dedicated analog LFO with triangle and square waveshapes, CV outputs for pitch, gate, velocity and after pressure, basic MIDI integration, and a mixer overload modification, which when engaged, allows the Minimoog Model D to conjure thicker and far more overdriven sounds than before.