The Soul Powerhouse on Shitty Guitars, Bum Notes and Being a Control Freak in the Studio

Curtis Harding is no stranger to spreading the good news through music. Born in Saginaw, MI, the guitar playing vocalist (whose aptly-named Soul Power album just dropped on Burger Records) spent his childhood touring with his evangelist mom. But while she was singing for Jesus, he was writing rhymes as he and his family moved from town to town.

From the outside looking in, the lives of the Hardings may have seemed like a great adventure. “You don’t think about it that way when you’re in elementary school and you have to leave your friends,” says Harding. But the family’s nomadic lifestyle afforded him a different kind of education. The kind of education that might be partly responsible for the quiet confidence/borderline arrogance he embodies. It’s that can’t-put-your-finger-on-it something that makes him intriguing and powerful, yet approachable.

Instead of fostering long-lasting friendships in every town his family lived in, Curtis picked up the guitar and taught himself to play. He started a love affair with music and shows no signs of letting up on that good loving. In junior high he played the trombone for a hot minute and admits to tinkering around with anything he could get a sound out of. He’s also a bit of a control freak, and he owns it. He once walked away from a record deal because he didn’t like the direction it was leading him in. But he kept at it. Finally, his dedication to music is paying off.

On his debut album, he’s taken everything he’s learned – from old school gospel artists such as The Williams Brothers and The Consolers – and peppered it with rock, blues and alternative influences. There’s a ribbon of sadness on “Castaway.” “Keep on Shining” is a revved up (and glossier) version of the Spinners’ hit “I’ll Be Around,” and on “Surf,” his carefree vocal calls are irresistibly nestled within a ’60s-era beach party. He expertly breathes emotion into his music and brings the listener right to him, wherever he stands. It’s a wild, genre-bending ride that illustrates soul is not about color or a range of categories by which to define something. It’s about taking everything that life gives, soaking it up and sharing it. All of it. And Curtis does not hold back.

Fresh off a trip from Cali doing album prep, the seasoned musician and songwriter – who used to sing background for CeeLo and who is also currently in a garage band called Night Sun (featuring fellow gospel lover Cole Alexander of The Black Keys and singer/songwriter Danny Lee) – chopped it up about his earliest musical memory, songwriting and his love of Johnny Depp.

Did your mom try to keep you from doing secular music?

She tried, but she couldn’t stop me; I’m very head strong. I come by it honestly.

Now she gets it, now she understands. It’s all the same. I’m still spreading the word, whatever that great concept of God is. I would call it good energy. Music can be a great spiritual experience. Whatever the artist is trying to get across…whether the artist is sad or had a bad day, [that] can come through on an album or record. Tell me your earliest musical memory.

Well, I remember my mom singing in church when I was four or five years old like it was yesterday. My godfather was the bass player. I remember looking at them and thinking, ‘I want to do this.’

It just depends on how I am feeling. There’s no particular way I approach it. Sometimes I come up with phrases. Sometimes I start with a melody. I could be at a bar and be in mid-conversation. Or be at home. When it’s there you go with it. If I’m in mid-conversation and something comes to me, I will definitely say, ‘Hold on a second’ or pretend to make a call. You don’t want to lose it.

Have you ever had writer’s block, and if so what do you do to overcome it?

I just stop and do something else. I will go to the guitar. I wouldn’t call it writer’s block; I just leave it and come back.

I read that you mainly use a Stratocaster. Do you have more than one guitar and are you loyal to the brand?

I have more than one. My friends and me sometimes we trade off.  I’m not particular. Some people are particular about tones. I’m also a fan of taking a shitty guitar and trying to make it sound better.

What do you like to do outside of music?


I like to go to the desert, I like women, I like bars, I like movies, and music, I like to hang out with my nieces and nephews. I have a huge family. I go to the movies by myself. It’s like a mental break to get lost in pictures. The last movie I saw was Transcendence with Johnny Depp. I like Johnny Depp, He’s a great character actor. One of my dreams is to hang out with Johnny Depp. I also read a lot. I like books and stories. Music is more than a hobby now. The world needs that.

I read that you moved to Toronto in 2008 to restore your musical energies, what happened there and how did you know that it was time to return to the States?

I started working on a project and it was not going the way I wanted it to go. I finished the record and had a conflict of interest with some guys in the group…personal stuff. So, I just moved to Toronto and became a regular person. But I knew it was time to come back when my uncle passed away. My mom said the funeral was in Michigan. I told everyone I was going to the funeral, and I might not be back. My father is up in age, he’s 84 years old. That was the turning point.

They have a great music scene. Lot of clubs and bands. The people in Toronto or Canada in general, don’t lock their doors.  They have amazing gun laws. People aren’t as stressed out as we are here, which opens doors for creative energy.  Conversely, what we deal with here [in the U.S.] adds to the grit of our music.

How did you meet CeeLo and start singing background for him?

Just being in Atlanta. Working for LaFace [Records] doing street promotion. I got on his first record as he was starting to tour.

If you had to describe what making music feels like, what would you say?

Aww man, that’s a good question. Writing it or recording it?

It can be relieving at times; it can be releasing, healing, and fun. There’s a melting pot of emotions, depending on what song you’re writing and how you’re feeling. There’s no one word [to describe it]. It’s a universal language. It’s the only thing [that everyone understands] when you go to another country. When you’re playing songs it can cross boundaries. It’s the only thing I can think of other than sex that can do that. 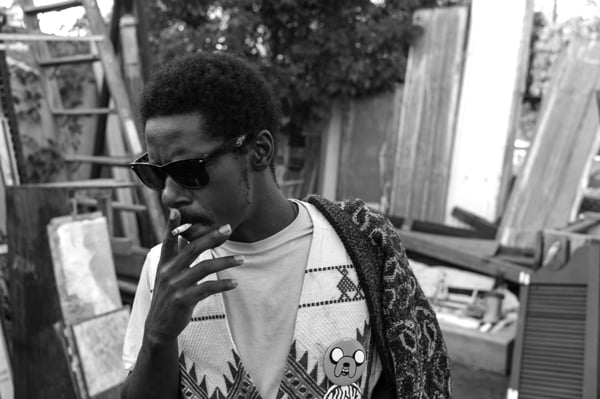 So far, what’s the best advice you’ve ever received?

Is that hard to do?

Not for me, maybe for other people. You have to be comfortable in your own skin.

Out of all the places you’ve lived, which is your favorite?

I like them all for different things. The weather in LA is amazing, and the beaches, Atlanta and the South has good food and good people. The public transportation in Toronto is the best. Can’t really call a favorite. It’s like trying to pick a favorite child or song.

I like them both, but I’m a studio rat. I’m always producing and writing songs. I also love performing live. If you hit a bad note, you just have to bend it till it’s right. Plus, I like the energy of the crowd.

Describe the making of a Night Sun album and how it’s different than making your solo record. Are you pulling from different places?

It’s the same. We’re all friends. We hang out in the same spots. First, we all have ideas we bring to the table. We sit and talk about them with booze. We let loose and chill and have some marijuana. Then we start playing. We like to take our time.

How long did it take to record Soul Power?

Two weeks…I mixed the record. I recorded it at the Living Room Studios in Atlanta. I let them master it. The sounds they get are amazing. They know their shit. I’m a control freak, but you have to be able to let go.

Why soul music? Or was there a choice in the matter?

I don’t think there was choice in the matter. That’s how I grew up. Listening to gospel, that’s where it comes from. To me at least; it’s in my DNA.