There’s a hum to everyday life.

It’s the clicking of heels on concrete. It’s the slow grind of the subway trains along the tracks during rush hour. It’s the way you feel your heart in your ears when you see someone you love.

Every day has its own white noise soundtrack, and every person has their own unique beat.

At least, that’s what Ayron Jones, the Seattle-based front man for Ayron Jones and The Way, believes.

In talking to Jones, it becomes clear relatively quickly that he’s more than just a guitar-slinging, wordsmithing, musician. He’s a thinker, a believer, and full of faith. We got to catch up with Ayron and talk about everything from music, to kids, to the universe. Get to know him the way we did – in his own words.

What got you into music?

Well, I was adopted when I was four by my aunt. And she was a very religious person – to this day she’s still a very religious person. But it was really being around church and soul music and gospel that got me into to wanting to be involved in music. From there, I taught myself to play piano, and I taught myself to play guitar. Guitar was my vessel. By the time I turned 19 I was ready to hit the bars.

What can you tell us about your creative process? How do the songs come together?

I’ve always been obsessed with the beat. You know when you listen to hip-hop — especially like ’90s East Coast or West Coast hip-hop – it’s just that beat that makes your head nod. It’s insatiable. It’s like a virus. For me, that’s where it starts. It’s that beat, that heartbeat, that rhythm that creates life. You know? For anything. And I’m using that term – not just to say that we’re bringing something to life – life is heartbeat, life is rhythm.

It’s human nature. Repetition is everything. Like, how many times have you taken a step? Countless. But when you were a baby and tried to take that first step you didn’t know what you were doing. But you took that first step and it was hard. And that second step was hard, too. The third step was a little easier, and the fourth was a little easier than that. You get where I’m going. The point is, walking has become a rhythm. That rhythm becomes a frequency, and it just becomes part of your life. When I write music, I rely on the beat because it’s the seed of life. This new record [Audio Paint Job] seems autobiographical. Can you talk a little bit about that?

It’s a cohesive story, and each song IS its own story. If you listen to the first three songs on the album – “Take Me Away” is the introduction to my story, right? When I was four years old, my mom abandoned me…That story has shaped me because it was a turning point where I was taken and thrown into a situation with another family where I had to adapt and learn.

I grew up with my aunt who was wonderful to me. But it gave me this independent perspective on life. At the end of the day, if someone’s going to try to make you a part of their family, you know? No matter how hard they try, there’s still something genetically that’s different about you. You’re looking at it from a different perspective.

Your mom and dad tell you who you are. They tell you where you came from. This whole album from top to finish is my story from that.

From that moment that I was abandoned – “Take Me Away” – that shaped my relationships – “Emily” – then I closed that chapter, and I become the rock star. And now I’ve got two kids, because I was trying to wild out and I thought I was something I wasn’t.

How have those experiences changed you as a person, and a performer?

I have this message, and it doesn’t even come from me – you could say I’m channeling it from somewhere else – but the message is supposed to help us realize that there’s so much more to our existence than we give ourselves credit for. It’s so important for us to push out the things we want to see in the world and if it’s truly peace and truly coexistence and true love that we want to see in the world, then I’d like to see people push that out. Because even silence dictates our reality. It’s just our thoughts and our minds. If we can start thinking about our reality that way we can change the universe, you know? Our universe.

That all sounds very…almost religious.

In a big way, music helps you connect to something bigger than yourself, and when music translates that feeling into a crowd, or into your headphones, that’s powerful stuff.

This album – is it your way of expressing all of that?

This album is more of a beacon. This album is to get my foot in the door so I can draw people to things like this – interviews and whatnot – so that, these philosophies, I can express through words. There’s only so much I can say in a song. And even then, there’s only so much I can say in a song that’s going to sell. Music is not really about the music itself, but the people that create the music – that’s the obsession, right? So, if I can channel something higher than myself, and put it on the album, and draw people into the physical expression that is me, and then when the spotlight’s on I have something to say, then maybe I can actually affect mass consciousness. And help us evolve consciousness. You’ve landed a spot in the lineup at Upstream – what does a live show look like? Does it translate to the album?

It sounds like it’s not just the music that’s evolved since the first album, but it’s you, too. Is that accurate?

I definitely do feel like I’m a different person. 100%. When I was in my 20s, I jumped into this marriage real quick – that’s how my daughter Phoenix was born. I jumped into the marriage really fast. I was like 24, going on 25. I was in this unstable thing with this woman, and pretty soon we got married.

I’m settled down now. There’s not the urge to be as out there as I used to be. There’s a maturity that I have now. I also feel like I’ve found my voice, my message, and what I want to talk about, who I want to be.

Your other passion – other than music – is your kids. Can you talk about how being a dad has changed you?

It’s hard because I look at my child and I go, ‘Man, you are the love of my life. I cannot imagine my life without this person here, with me.’ I just love her to death. I just want to show her the world. For me, everything is energy. That’s how I look at everything.

This situation [with my son], he’s more me than my daughter is. He’s got a stable home, he has two parents in this stable home. But, you’re your parents’ child. Those memories haven’t gone anywhere. So much so, that you look like them, you act like them. You are your “Parents 2.0.” You’re living their life, it’s just your version of their life.

But that’s what I’ve realized – it’s more important to be a rock star now more than ever. Because someday he’s going to grow up and be like, ‘Who is my dad?’ – and I want to be able to say, ‘Your dad is a great man. A wonderful artist – one of the best artists, maybe. He was a great man. He lived with the intention of doing good things for the world.’

Music and my kids are one and the same to me. I want to stand up and be something for them. I had such a painful upbringing. It’s hard for me to talk to them about it right now. I have to rewrite the story. I’m Ayron Jones, I’m the kid. I’m the child of the child. I have to change the story. I’m learning the laws of the universe to change my story.

Your story is tough, though. And you’ve learned from it. So, how are you using it?

If I looked at it from the perspective of this lifetime alone, right? I’m 30, and at 4 years old, what did I do to deserve that? I’m only taking responsibility for the being that I am now, not the being that I was before. Energy works – it doesn’t know time like that, right? If I’ve lived many lifetimes, there’s a lifetime in there somewhere where I deserved that. That was my fault. Maybe I’m not conscious of that, but…accept it. Love it, love yourself and put out what you want to see. That’s your karma, that’s your energy, that’s what created you. That’s your lesson to learn…

Everything comes around. But here’s the best part. If the world is just a reflection of your thoughts, and you make your thoughts, who’s the creator? You are the creator. You can choose whatever thoughts you want to think.

And you think it starts with the music, yeah? 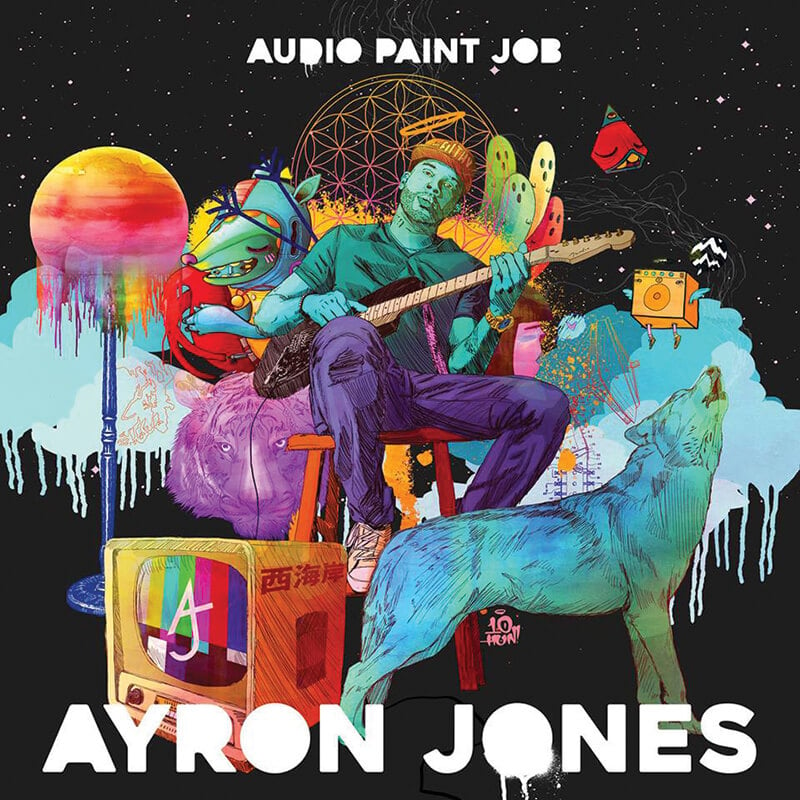 Standout Track: “Love Is The Answer”